Syria ceasefire should not lead to terrorists’ reinforcement: Zarif 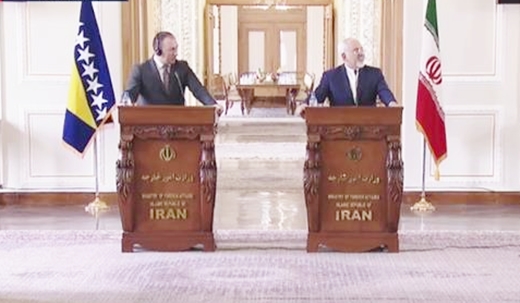 Iran's Foreign Minister Mohammad Javad Zarif says any ceasefire in Syria should not give an advantage to terrorist groups wreaking havoc in the Arab country.

“A ceasefire [in Syria] does not mean allowing Daesh, al-Nusra Front, and other al-Qaeda-affiliated groups to carry on their activities,” Zarif said during a joint press conference Monday with his Bosnian counterpart Igor Crnadak in the Iranian capital, Tehran.

Zarif also said that Iran has always supported any kind of truce in Syria; adding, however, that the details of such a plan should be discussed.

“Iran has always believed that the crisis in Syria has no military solution,” the Iranian minister said, adding, “the plans presented so far have brought about [the issue of] ceasefire, and Iran has emphasized the matter in addition to the delivery of humanitarian aid since the first negotiation meeting in Vienna.”

Referring to the relations between Tehran and Sarajevo, Zarif said the two sides are willing to expand bilateral ties in various fields including political, economic and banking areas.

Crnadak, for his turn, welcomed further expansion of Iran-Bosnia cooperation in different areas and dialogue between the two countries.

He also said that the two sides discussed the impact of terrorism on Europe, the unprecedented refugee crisis in the continent, and the situation in Yemen and Syria.

The International Syria Support Group (ISSG) agreed in the German city of Munich on February 12 to a “cessation of hostilities” in Syria and to implement a ceasefire in a week. However, acts of terrorism continues unabated in the country.

The ISSG said in a statement that the ceasefire in Syria does not include areas held by groups designated as terrorist organizations by the United Nations Security Council, including Daesh and al-Nusra Front.

The ISSG members also asked the UN to resume the collapsed peace talks between the Syrian government and the Saudi-backed Syrian opposition group known as the High Negotiations Committee (HNC).

Syrian President Bashar al-Assad said on February 15 that “a ceasefire means in the first place halting the terrorists from strengthening their positions. Movement of weapons, equipment or terrorists, or fortification of positions, will not be allowed.”