A polo match is held in Isfahan to prompt UNESCO to register the sport in Iran’s name.

Ettela’at newspaper ran a short report in its October 12th issue on a polo match in Isfahan, central Iran, to urge the United Nations Educational, Scientific and Cultural Organization to register the age-old game in Iran’s name. The following is the translation of the report: 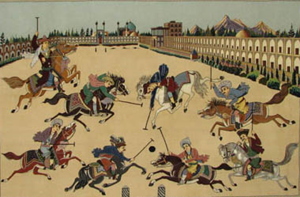 A polo match was held in the world’s oldest polo field in Isfahan on the sidelines of the 2014 Inter-City Intangible Cultural Cooperation Network (ICCN) International Festival, General Assembly and Women’s Forum.

Chairman of the Iranian Polo Federation Hamzeh Ilkhanizadeh said that the match, which was held symbolically in cooperation with the provincial Cultural Heritage, Tourism and Handicrafts Organization, was meant to document Iran’s bid to have the team sport (which is played on horseback) registered as an Iranian heritage at UNESCO.

He also said that Imam [Naqsh-e Jahan] Square in Isfahan is a standard venue for a polo match, adding that polo used to be played in the square up until 90 years ago.