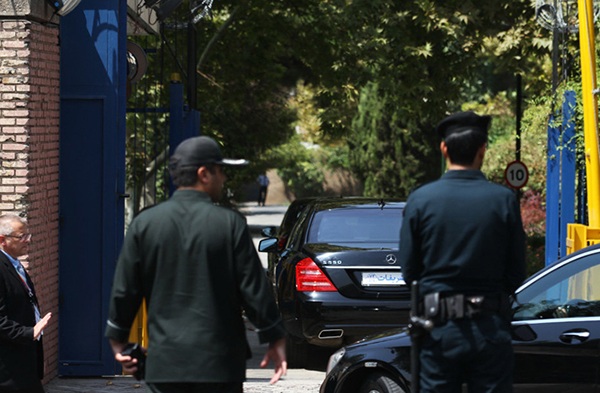 A group of student Basij members have raised concern about the reopening of the British embassy and the text of the Joint Comprehensive Plan of Action.

Four student Basij organizations have expressed their critical views of and concerns about the reopening of the British embassy in Tehran and the Joint Comprehensive Plan of Action (JCPOA), complaining about the government’s lack of transparency in handling the Tehran trip of the British foreign secretary. They have also said that their review of the text of JCPOA has resulted in 70 questions on the Iran nuclear deal.

The Iranian Students’ News Agency (ISNA) has published the remarks of the heads of the four student organizations in a press conference. The following is a brief translation of what they had to say:

Mehdi Ramezanzadeh, the head of a Tehran University student council:

It has now become obvious that nuclear talks are not the sole topic about which people have been kept out of the loop. The government continued its cloak-and-dagger measures in the run-up to the British embassy reopening too. Why should we first learn about the embassy reopening from a foreign news agency? Why should an Iranian Foreign Ministry official confirm the news later?

The Iranian nation has no favorable recollections of Britain and what is has done throughout history. The Britons have always been after looting, bullying and colonial moves.

We said nothing about the text of JCPOA over the past month. The great volume and the specialized content of JCPOA’s text are to blame for the student Basij’s delay in reviewing the text. We wanted to consult with the experts and scientifically review that text. Finally we came up with 70 questions on JCPOA. We will make these questions public in coming days.

Jalal Khaleghi, the head of Basij organization at School of Media Studies

Today we see that the government is more willing to share its secrets with foreigners than with the Iranian nation. […] The closure of the British embassy reduced London’s intelligence work. The reason why this embassy has been reopened is unclear. […]

We know nothing about the reason behind the government’s secrecy. Our concerns about the British embassy reopening are graver than worries stemming from the 1953 Anglo-American coup.

We call on students and media to join the two [students] campaigns which focus on the reopening of the British embassy and the government’s trust-building measures.

Student Basij has complaints about the government’s performance. Why has the government pursued a secret plan? Why has the government not talked about such an issue with people? We are opposed to the British embassy reopening because of terrible memories the Iranians have of Britain’s measures in Iran. Nobody will forget the coup Britain plotted against Iran. Nobody will forget the eight-year Iraqi imposed war and the British support for this country. That’s why we are unhappy with the embassy reopening and the presence of a senior British official on Iranian soil.

We urge the government not to do something which may make the next generations feel shameful for this government’s improper measures. We hope the government takes heed of the country’s national interests.

Soheil Kiarash, the head of Basij organization at Shahed University

A month-long review by the Student Basij Organization of the Iran nuclear deal shows that the country’s national interests have not been maintained in the nuclear deal, not even minimally. We raised this issue with [senior nuclear negotiator] Mr. Araghchi who responded that the deal was the best they [the country’s negotiators] could clinch. This comes as Mr. Zarif said in parliament that maximum national interests have been taken into account in the nuclear deal.

Prior to the talks, the negotiating team stressed that they would respect the red lines and the nation’s interests in the talks. The question here is: Were you given any order to have talks and produce a result?

I do not buy what [Chief of Staff of the Iranian armed forces Major General] Firouzabadi has recently said about JCPOA. He has knowledge in military issues, [not in nuclear matters].