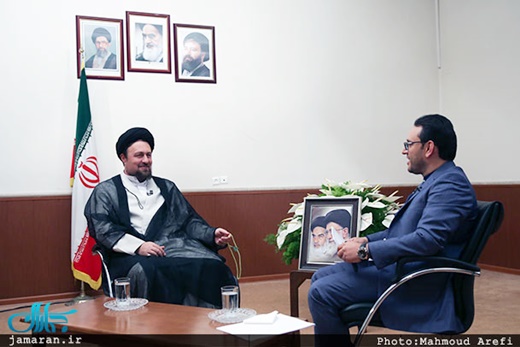 Seyyed Hassan Khomeini, the grandson of the late founder of the Islamic Republic Ayatollah Ruhollah Khomeini, was finally invited by the Islamic Republic of Iran Broadcasting (IRIB) to take part in a live interview. Not surprisingly, he frankly expressed his critical opinions of the current situation in Iran.

The Imam’s grandson finally appeared on state TV and voiced his views in a Q&A program, something similar to a hard talk show.

A couple of days before the 27th anniversary of Imam Khomeini’s death, and a few days after Hassan Khomeini’s controversial absence from the opening session of the 5th Assembly of Experts, IRIB’s moveto invite him for a live interview seems to indicate that changes have already begun since the appointment of a new chief of the huge broadcasting organization.

Below is IFP’s translation of some of his most important comments, as reported by Entekhab.