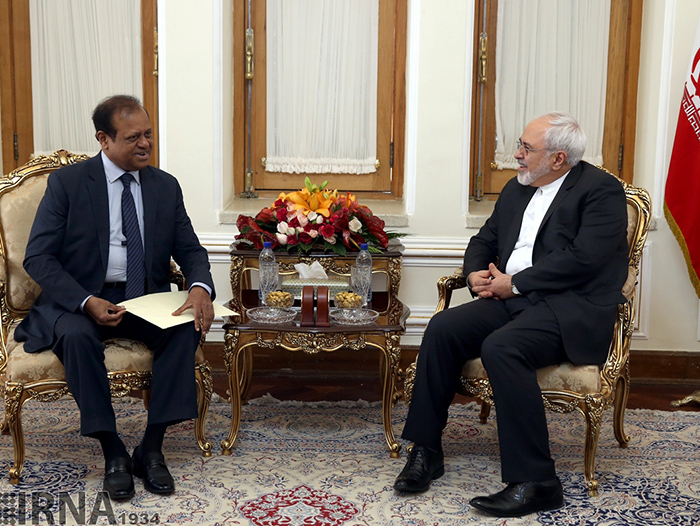 Sri Lanka says it is still interested in purchasing crude oil as well as oil products from Iran.

Premajayantha, on a visit to Iran upon the invitation of Iran’s Vice President for Science and Technology Affairs Sorena Sattari, also expressed hope that energy relations between Sri Lanka and Iran would expand now that the sanctions against Iran have been removed.

Zarif, for his part, described as important the expansion of Iran’s relations with Asian countries including Sri Lank.

He also emphasized that the removal of sanctions against Iran could provide an opportunity for Iran and Sri Lanka to boost their relations in all areas.

Sri Lanka was dependent almost entirely on Iran for its crude oil supplies before halting imports in what appears to have been a result of US-led sanctions over the past few years.

Before the sanctions, the Asian country bought almost all of the 50,000 barrels of oil which it needs per day from Iran. Sri Lanka’s only refinery, the Sapugaskanda plant, is configured to run on Iranian light crude.

The sanctions had left Sri Lanka struggling, with its sole refinery facing shutdown from time to time amid shortfalls in the absence of Iranian crude.

The sanctions were removed last January after a nuclear deal sealed between Iran and the permanent members of the Security Council plus Germany – the so-called P5+1 group of countries – came into effect.  The deal removed a limitation on Iran’s oil exports that had been in place for several years in return for steps by the country to restrict certain aspects of its nuclear energy activities.

Rokneddin Javadi, the former managing director of the National Iranian Oil Company (NIOC), told the media in November 2015 that talks had started to resume oil exports to Sri Lanka.

However, no significant progress in that connection appears to have been made as of yet.