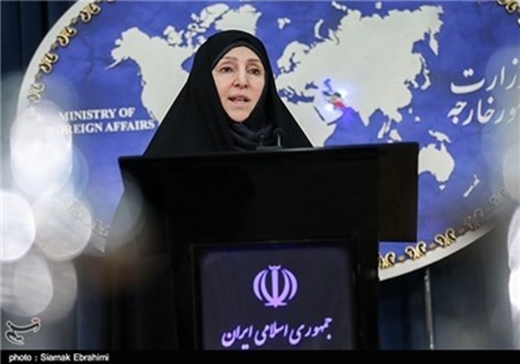 The foreign ministry spokeswoman has said that Iran is the source of stability and security in the unstable region of the Middle East.

Iran’s Foreign Ministry spokeswoman slammed recent allegations raised by US President Barack Obama who accused Iran of anti-Semitism and having expansionist ambitions, and hit back at Washington for trying to flare up tensions in the Middle East region.

“The Islamic Republic of Iran is the source of stability and security in the unstable region of the Middle East and it actively encourages and pursues the political approaches and regional cooperation for countering violence and extremism,” Foreign Ministry Spokeswoman Marziyeh Afkham said on Saturday.

Her comments came in response to Obama’s interview with The Atlantic on May 19, when he accused Iran of anti-Semitism and expansionist ambitions, reiterating that the “military option” against Iran is still viable.

Afkham made it clear that Iran respects followers of all divine religions, including Jews, noting that Tehran’s anti-Zionism policies and opposition to the Tel Aviv regime have nothing to do with Judaism and its followers.

She also described attempts to promote “Iranophobia” as a plot that aims to fan the flames of regional crises and incite rift.

“The historical facts provide clear proof of Iran’s constructive and peaceful role in the region and the world,” she explained.

Afkham further decried Obama’s talk of military option against Iran as “recurring negative rhetoric” that has no place in the real world.

Obama’s anti-Iran comments came while Washington is supporting Saudi Arabia in a military campaign against Yemen.

The Saudi-led coalition, which seeks to restore power to the fugitive former President Abd Rabbuh Mansour Hadi, includes eight other Arab states and is receiving logistical support from the US, Britain and France.

According to Yemen’s Freedom House Foundation, the Saudi airstrikes have claimed the lives of nearly 4,000 Yemeni people since March 26, while more than 7,000 others have been wounded, most of them civilians.

Meantime, the Office of the High Commissioner for Human Rights (OHCHR) revealed that 2,453 civilians have been injured, among whom 130 were women and 234 children.