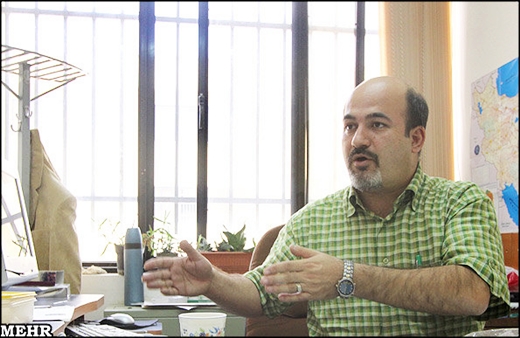 Soil erosion in Iran is so intense that it is costing the country $56 billion every year, says Mohammad Darvish, an official at the Department of Environment. On average, soil erosion in Iran is three times greater than other Asian countries, and it is one of the highest in the world, Darvish tells the Tehran Times in an exclusive interview.

Darvish is in charge of education and environmental contributions, and is not satisfied with the number of NGOs active in protecting the environment in a country as big as Iran, with a population of around 78m.

Excerpts from his interview with Tehran Times are printed below:

Q: What is your evaluation of the current status of environment in Iran?

A: The current condition of Iran’s environment could be studied in terms of five fields: soil, water, biodiversity, weather, and a newly added field, which are people’s contributions to protecting the environment.

The estimated price for each ton of soil is now $28. Two billion tons of soil are eroded in Iran every year, costing the country $56bn annually. I’m sorry to report that, on average, soil erosion in Iran is three times that of Asia and one of the highest rates globally.

While hundreds of thousands of Iranians lost their lives during an eight-year war to defend their soil, they are now losing an amount equal to the mass of Lesser Tunb [an island in the Persian Gulf] every year, simply by adopting poor polices.

As the Supreme Leader highlighted last year, soil is more important than water, because 200 to 1,000 years are required to form soil, but there are ways to turn saline water into fresh water.

However, water (consumption) is the second challenge in Iran.  Instead of 40%, Iranians are draining over 80% of their water reservoirs, the result of which is water stress across the country. Water levels have been declining in more than 60 main plains in the center of Iran. Besides that, the fastest desertification of the century has taken place in Lake Urmia, where 480,000 hectares of land have turned into desert within 15 years.

Most of the lagoons are in deplorable conditions, and a total of 60% of them, including Almagol, Alagol, and Ajigol in Payab-e Atrak, have been left bone dry. Gomishan has receded 1.5km. The average depth of Anzali has declined from 14 meters to 0.7 meters. We have lost Gavkhouni, Arzhan, Parishan, Bakhtegan, Kaftar, Poozak, Saboori, Hamoon, Jaz Murian and Horolazim. We have lost 30% of Shadegan. Helleh lagoon is not in good condition either.

Apart from these, we have lost 18 million oak trees in the Zagros Mountains, which are constantly subject to different pests such as wood-boring beetles and the Loranthus.

Biodiversity is no better than the other four fields, with the total number of gazelle, deer, chinkara, Persian fallow deer, wild goat, and so on, having fallen below 110,000, while there was 10 times more about half a century ago. Biodiversity is a bio-indicator which gives us information about the quality of an ecosystem where animals are living.

Instead of investing in soil and water, Iranians could move towards high-tech and alternative energy, and take advantage of their 4,700km maritime border or historical Silk Road.

On the other side, people’s contributions to protect the environment are not satisfactory. Though the number of NGOs over the past two years has increased from 400 to 780, the figure is nothing compared to a 70m population.

Despite the fact that Article 50 of the constitution states future generations must be provided with a flourishing social life and that the protection of environment is a public duty and that any activity which may damage or pollute the environment is forbidden, the soil, water, weather, and biodiversity all are not in a good condition.

Q: Iran is moving fast towards having more and more deserts in the not-too-distant future. What measures do you think are needed to slow this process?

A: First of all, I need to explain that deserts are not an advantage or disadvantage per se. There are many countries in the world which are 100% desert, but they are among the richest in the world. Also, there are some countries 100% covered in jungle, but who are among the poorest, like Bangladesh. What is important in this regard is the attitude of the ruling body towards the management of its ecological capital.

In Arizona, for example, people used to grow corn, bringing them $3,000 per hectare, but they replaced it with wind turbines and got $3,500 instead.

Iran’s deserts stand first among 243 countries on the earth for developing photovoltaic cells and solar panels. To Iranians, though, a desert seems to be a dead piece of land, due to thousands of years of farming culture. Today, however, land is valued at the amount of money obtained from it, and deserts are popular tourist destinations in many places.

Let’s turn to your questions. Of course we must take quick measures to slow the process of desertification and ecological debt. The most important reason we are moving towards ecological debt is because of policies we have adopted for the development of our country which are not in accordance with its ecological conditions.

Instead of investing in soil and water, Iranians could move towards high-tech and alternative energies, and take advantage of their 4,700km maritime border, or historical Silk Road. Iran is among the top five countries in the world in terms of natural landscapes, and 10th for historical buildings. It could easily attract 20-22m tourists every year, collecting revenue twice that of its oil industry.

Q: What is your department doing now to bring the ongoing environmental challenges under control?

A: Well, what we are currently pursuing seriously is raising a new generation with an eco-friendly attitude, who never sign any deal or agreement that may endanger their environment in the future.

In this regard, a memorandum of understanding was signed two years ago between the Minister of Education Ali-Asghar Fani and Ms. Masumeh Ebtekar, head of the Department of Environment, according to which 96,000 teachers were trained and sent to schools to expose students indirectly to environmental activities. These efforts are being made at elementary levels to help students love their environment.

Besides this, 44 environmental schools have been founded so far in Alborz province [in northwest Tehran] to have students engage in environmental practices.

The department is also trying to raise awareness of parliamentarians, lawyers, artists and athletes, and to make them conscious of the dangers threatening the environment by supplying learning materials as well as setting up workshops.

However, the department is one of the weakest and poorest organizations inside the ruling system, and cannot fulfill the responsibilities put on its shoulders. Though it has had the highest percentage budget increase during President Rohuani’s government, about 30 to 50, the figure is still meagre because its base was so low.