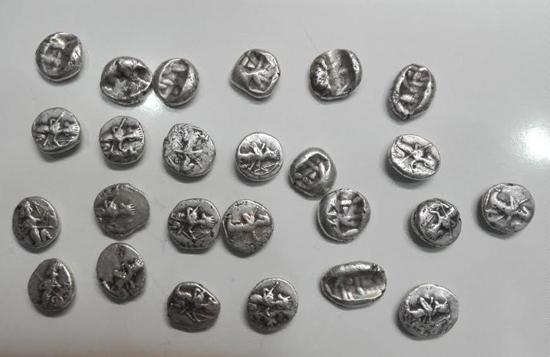 Tehran’s Police Chief announced that a smuggler of ancient antiques has been arrested in Tehran’s Shahid Beheshti metro station.

After the strip search of the suspect, a bladed weapon and a cloth bag filled with 25 Achaemenid coins were found, he went on to say.

The suspect confessed that he had taken the coins from a man named Alireza in western Iranian city of Khorramabad, Colonel Raghi added.

Tehran’s Police Chief pointed to the futile attempts of the suspect to deceive police agents by claiming that the coins are forged and continued.

“Police agents didn’t fall for that. After the inspection of his cellphone, they found some videos of mountain excavation. It came out that the coins were actually genuine, and a man in Bokhrest Street, Tehran, was expecting them.”

Colonel Raghi said the antique smuggler had the audacity to offer all the coins as a bribe to the police agents, asking them to release him in return.

The suspect was finally handed over to the Police Department.

The Achaemenid Empire (c. 550-330 BCE), sometimes known as First Persian Empire, was an empire in Southwest Asia, founded in the 6th century BCE by Cyrus the Great who overthrew the Median confederation.

It expanded to eventually rule over significant portions of the ancient world which at around 500 BCE stretched from the Indus Valley in the east, to Thrace and Macedon on the northeastern border of Greece, making it the biggest empire the world had yet seen.