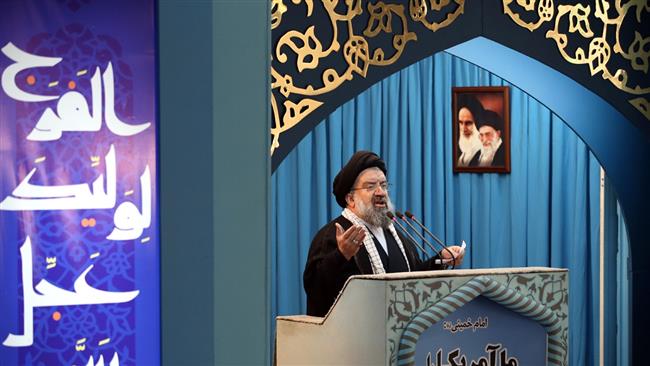 Terrorist acts are strongly condemned in France and other parts of the world, Ayatollah Ahmad Khatami said. Tags: Iran-France, Terrorism.

A senior Iranian cleric has condemned the recent bloody terrorist attacks in France, urging a genuine international campaign against the menace of terrorism.

“Terrorist incidents are strongly condemned in France and other parts of the world,” said Ayatollah Ahmad Khatami during a sermon to worshipers at the weekly Friday Prayers in Tehran.

At least 130 people were killed and 352 others injured when assailants struck at least six different venues in and around Paris on November 13.

In a statement the day after, the IS Takfiri terrorist group claimed responsibility for the attacks.

Khatami further said that the IS terrorists and other Takfiri groups have been formed as part of the campaign against Islam and said, “It seems that IS has no mission but to undermine Islam because it has not so far breathed a single word against the Zionist regime [of Israel].”

New details about two of the suspects in the attacks on the French capital last week indicate that despite the generalized characterization of the duo as Muslims, they not only did not follow Islam but also grossly strayed from Islamic teachings.

Reports on Thursday showed that the Abdeslam brothers, Brahim and Salah, ran a bar in Brussels and used a lot of drugs and drank alcohol, which are forbidden in Islam.

The Iranian cleric added that the US and Europe are nurturing Takfiri terrorist groups, including IS, and urged Washington and its European allies to stop their support for terrorists and fight terrorism sincerely.

He said Iran is the only country that has been firmly fighting terrorism, adding that all countries in the world need to unite in the battle against savage terrorists.

The deadly incidents in Paris came in the wake of another terrorist attack which killed 44 people and wounded 240 others in a southern suburb of Beirut on November 12 after two large explosions claimed by IS militants rocked a security post in Hussaineya Street in the crowded Borj al-Barajneh neighborhood.