Saudis Have Nuclear Weapons in Mind as an Option: Richard Nephew 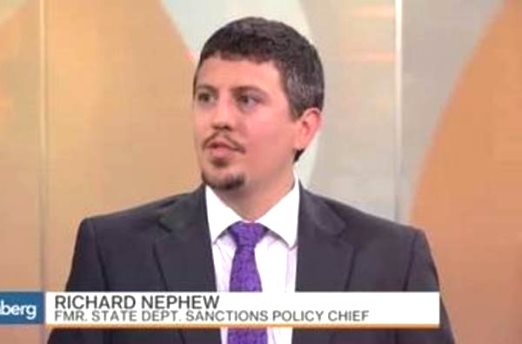 Richard Nephew, who was a top nuclear negotiator during the talks with Iran up until late 2014, says he does not think that Saudi Arabia is currently seeking nuclear weapons, but it definitely has it in mind as an option.

Tehran Times recently interviewed Nephew on his recent remarks about Iran and the nuclear competition in the Middle East, particularly after the recent nuclear deal [JCPOA]. Here’s IFP’s coverage of his interview, as well as his remarks published by Brookings Institution.

“I do not think that Saudi Arabia is, at the moment, pursuing nuclear weapons or interested in them in any active fashion,” Nephew told the Tehran Times.
“However, I do think that they have it in mind as an option, depending – frankly – on what Iran does,” said Nephew, the former principal deputy coordinator for sanctions policy against Iran.
Following is the text of Tehran Times’ interview with Nephew:

Q: Do you think that Saudi Arabia is either seeking to buy or manufacture nuclear weapons?
A: I do not think that Saudi Arabia is, at the moment, pursuing nuclear weapons or interested in them in any active fashion. However, I do think that they have it in mind as an option, depending – frankly – on what Iran does.
This, to my mind, is the question that Iranian policymakers will have to grapple with in 10-15 years, because – like any other state – what Iran’s leaders choose to do will have ramifications on the security calculations of their neighbours.

Q: What will be the reaction of the international community if Saudi Arabia gains access to nuclear weapons?
A: Well, I cannot say for sure, of course, but the international community has been generally hostile to the spread of nuclear weapons to new states. In previous decades, this hostility was held in the context of the Cold War. But, as India and Pakistan found in the 1990s, it came with sanctions in later years. I would imagine that the Saudis would face similar pressures.

Q: In your Brookings speech, you said that Iran’s return to the international market will increase the country’s vulnerability. Isn’t such a statement contrary to the spirit of the JCPOA?
A: No, and frankly I think this comment has been taken out of context. Many in my country have argued that Iran will be invulnerable to sanctions when it is part of the international economy. That’s not true. Iran will be vulnerable because it will have trade ties that can be severed and that severing can do harm to Iran. But the same applies to basically every other country in the global economy. So, the same argument exists for japan, Germany, India, Russia, etc.
The question is how likely is it that sanctions will be imposed against parts of the global economy. If there are no good reasons to pursue sanctions, then this threat – which exists for all parts of the global economy – is meaningless. My point is that Iran is not going to become immune to global economic pressures – sanctions or otherwise – when it joins the global economy. Likewise, Iran will be “vulnerable” to global economic problems, recessions, trade problems, etc. But this vulnerability is OK to Iran because it is also a profitable vulnerability: trade and connections to the global economy help generate growth and wealth for Iranians. There is just a trade-off that exists: with connections come vulnerabilities.

Nephew’s Report about Iran, Saudi Arabia and Nuclear Competition in Middle East
The Tehran Times interview with Nephew came after his newly released report, co-prepared with his Brookings Institution colleague Robert Einhorn. In their joint report, Einhorn and Nephew argue that the Joint Comprehensive Plan of Action (JCPOA) will not lead to a “proliferation cascade” throughout the Middle East. Instead, their report suggests that the Middle Eastern nations thought most likely to pursue nuclear weapons are constrained from doing so, for a variety of reasons. In fact, Einhorn and Nephew conclude, the rigorous implementation of the JCPOA can reduce the likelihood of a Middle Eastern nuclear arms race by taking the possibility of Iran’s pursuit of a weapon off the table.
One of the main concerns about the JCPOA has been that its terms will encourage Iran’s neighbours in the Middle East to pursue nuclear weapons programs of their own. Einhorn and Nephew explain it thus:
“Others claim that, by legitimizing Iran’s enrichment program, permitting Iran to ramp up its nuclear infrastructure after 10-15 years, and facilitating an economic recovery that will enable Iran to greatly boost the resources devoted to its nuclear program, the JCPOA itself will be the catalyst for additional proliferation.”
They contend that, while Iran may have been expanding its nuclear capabilities prior to the JCPOA, the international community considered Iran’s nuclear program at the time to be illegal and sanctionable, and regional states had some hope that a deal would be struck that would terminate the program and end the nuclear threat.
Now, according to this view, regional states have concluded that the deal actually reached is not capable of alleviating their concerns, and they may feel compelled to pursue their own capabilities to prepare for the time when Iran’s nuclear program emerges from its restrictions in 2025-2030.
Einhorn and Nephew studied four leading Middle Eastern countries – Saudi Arabia, the United Arab Emirates (UAE), Egypt, and Turkey – and found that the possibility of proliferation by each one was relatively small:
Saudi Arabia is Iran’s greatest regional rival and has already announced plans to develop a large-scale civilian nuclear power program by 2040. However, its domestic nuclear capacity has remained small, owing in part to low oil prices and their effect on the Saudi budget. The country is also heavily reliant on foreign assistance to build its civilian reactors. It has expressed some interest in developing a domestic enrichment program, but that would take considerable time to build up. Of course, the Saudis could acquire a [ready-made] nuclear weapon. However, though it has long been assumed that Pakistan has agreed to provide a weapon to Riyadh should it ask for one, Einhorn and Nephew found scant evidence of such an agreement. Moreover, the international repercussions for both Riyadh and Islamabad if this actually came to pass are probably enough to prevent both countries from going through with it.
The UAE has also adopted a robust anti-Iran policy, for example in its commitment of forces to the anti-Houthi coalition in Yemen (under the perhaps somewhat misguided assumption that the Houthis are Iranian proxies). But the UAE has held out more hope for engaging Iran than the Saudis have, and its nuclear program is even more dependent on external support. The UAE created the “gold standard” for nuclear energy deals in its 2009 123 Agreement with the US, wherein it renounced all ambitions toward uranium enrichment or spent fuel reprocessing. Einhorn and Nephew found no evidence that the UAE is interested in changing that position, let alone in developing a weapons program.
Egypt has rejected the idea of developing a nuclear weapon since the 1960s and has been one of the leading proponents of creating a “Middle East Weapons of Mass Destruction-Free Zone.” Though Cairo does have a small nuclear research program, it lacks the financial wherewithal to expand it and, unlike the Saudis, it does not identify Iran as the biggest threat to regional stability or its own security. Rather, the Egyptians see terrorism and the Muslim Brotherhood as their biggest concerns, and neither of those warrants developing a nuclear deterrent.
Turkey, with its membership in NATO, arguably already has a nuclear deterrent, though it might also seek a domestic weapons program. However, Turkey’s relationship with Iran has remained relatively strong even though the two countries are on opposite sides when it comes to supporting factions in the Syrian civil war, and so an expanded Iranian nuclear program is unlikely to spur Ankara to take any drastic action.