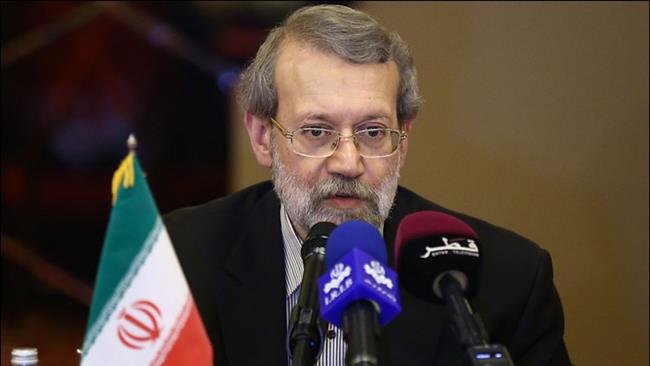 Iran's parliament speaker has said that many problems of the Islamic world come from the negligence of the Muslims about enemy plots.

‘We are witnesses to the occurrence of disputes in the Islamic society today. What is really going on (in the Muslim World)? What is this mess that the Saudis have made in Yemen? Is it not enmity against God?’ said Larijani in a meeting with the spouses of the parliamentarians.

The parliament speaker said, “The Takfiri terrorists are today generating disputes among the Islamic Ummah, using religion as a tool at the service of the enemies of Islam and the Muslims need to act as a solid arm to counter that serious plot”.

Larijani reiterated that many of the problems prevailing in the Islamic world are due to the negligence of the Muslims about such plots, which has led to the prevalence of broad corruption in various parts of the Islamic world.

“Isn’t it misdemeanor for a country that claims to be the guardian of Islam that a young man is treated so much beneath the human dignity there and insulted so harshly? Can such a society be called an Islamic society?” he said referring to the defaming of a couple of young Iranian Hajj pilgrims in a Saudi airport.

The parliament speaker further posed the question: Why were the wars against Syria and Yemen launched?

‘The Great Prophet (Peace Be upon Him) says that the Muslims resemble a single body and if a limb of that body is hurt it will lead to pain for the entire body,’ he added.