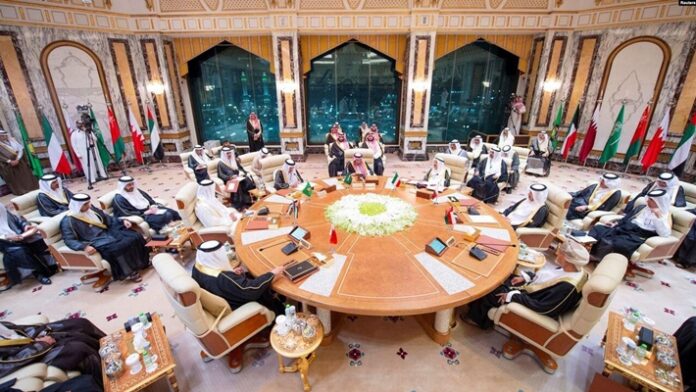 Saudi Arabia is on the edge amid ongoing regional developments as it tries to divert attention from key issues.

The Saudis, who seem a little anxious amid the recent fast-moving developments, hosted three regional meetings last Thursday and Friday: The Organization of Islamic Cooperation (OIC), the [Persian] Gulf Cooperation Council (GCC) and the Arab League. But that anxiety has been coupled with some questions, including “Why has there been so much haste and back-to-back meetings?” and, “Were those meetings successful, after all?”

Coincidence of Meetings with Developments

The holding of the meetings in Mecca none of which produced full consensus comes as developments are unfolding at a fast pace in the region.

One of the key ongoing developments is the political tension between Iran and the United States, which has worried most of the regional countries as well. These countries fear that the US may be pushed by some rich regional sheikhs into a war with Iran whose dimensions and consequences are not predictable.

The meetings were held on the threshold of International Quds Day. Some experts believe they were aimed at overshadowing the millions-strong worldwide rallies on that day.

At the same time, the meetings are not completely unrelated to the so-called “Deal of the Century” initiative proposed by US President Donald Trump to destroy Palestine completely. The plan initiated by Trump’s son-in-law Jared Kushner in cooperation with Zionists takes on board regional Arab states, especially Saudi Arabia, Bahrain and the United Arab Emirates (UAE).

The Arab League meeting was one of three held in Mecca last Thursday amid profound differences which they tried to keep under wraps. The Iraqi delegation led by President Barham Salih expressed strong opposition to the final statement of the meeting, something that Saudi authorities might have never imagined.

Statements released by the GCC, OIC, and Arab League sparked reaction from many parties, authorities and prominent political groups in the region from West Asia all the way to the African Middle East. Secretary General of the Lebanese Resistance Movement Seyyed Hassan Nasrallah were among those who said Saudi Arabia needs the West, the US and their intelligence services for survival. He also said some Arab regimes have been plotting against the Islamic Republic of Iran since the victory of the 1979 Islamic Revolution in the country.

Mohamed Abdel Salam, the head of the Yemeni delegation and spokesperson for Ansarullah, also weighed in on the meetings held in Mecca. He said the participants swayed by Saudi Arabia issued a unilateral statement which made no mention of Palestine, the most pressing issue of the Muslim world.

The meetings and the statements released in them did not receive a positive feedback in the occupied Palestinian territories which hosted mass anti-Israeli rallies on International Quds Day last Friday.

A pivotal issue associated with the meetings was the differences among participants, especially with Riyadh. One of the videos which went viral on social media shows the Qatari prime minister snubbing the Saudi King. Unlike other participants, Sheikh Abdullah bin Nasser bin Khalifa al-Thani did not go to King Salman to shake hands with him.

Kuwaiti Emir Tamim bin Hamad al-Thani refused to take part in the meetings and, instead, sent Prime Minister Abdullah bin Nasser bin Khalifa Al Thani. Riyadh-Doha relations have been strained since June 5, 2017 following the blockade of Qatar by the Saudis and other GCC members. Maghreb’s king, who has not been in good terms with Riyadh since the murder of Jamal Khashoggi, did not attend the meetings, either, and sent over the country’s prime minister instead.

The Saudis also tried to tried to draw the attention of participants to Iran by taking a swipe and Tehran and bringing up issues such as the suspicious attacks at oil tankers in the UAE.

Naturally, the centrepiece of the talks was the Zionist regime of Israel which is slowly advancing its anti-Islamic objectives amid the recent fuss that the Americans have kicked up in the region against Iran.

Meanwhile, the Al Mayadeen news network criticized Saudi Arabia for holding the three meetings in Mecca. It said Riyadh aimed to garner support by holding the meetings, but to no avail as the deep divisions between the Saudis and their closest allies show the Saudi rule is facing a brick wall. According to the network, Riyadh also accused Iran of working hand in hand with the Yemeni army to target Mecca. They displayed parts of drones that they claimed belonged to Iran and called for all resources to be mobilized against Iran.

According to Al Mayadeen, Riyadh’s attempts to get other Arab countries on board with Saudi Arabia in order to counter Iran failed. Only Sudan’s military ruler General Abdel Fattah Al-Burhan announced he would welcome all actions taken by Persian Gulf countries to ensure their security. However, other Arab, Persian Gulf and Islamic states did not support the option of war against Iran and echoed the Kuwai Emir’s call for talks in order to defuse the war propaganda.

It can be said that the three meetings in Mecca show Saudi Arabia only has the UAE, Sudan’s Military Council, Israel and US hawks by its side. Saudi Arabia’s isolation will become more evident only when US President Donald Trump, fearing the repercussions of a destructive war, retreats from his attempts to fuel tensions with Iran and begins to call on France, Saudi Arabia and the UAE to end the war on Yemen.