Saudi Arabia and the UAE; disputed territories and geographical maps 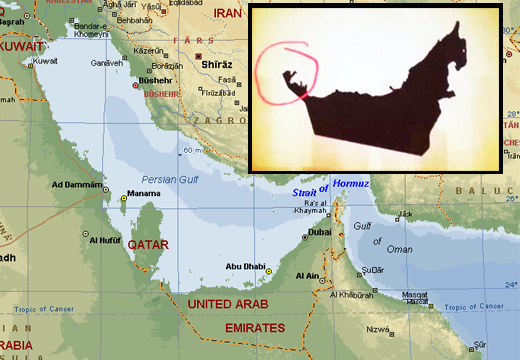 A border dispute is simmering between Saudi Arabia and the UAE with Riyadh trying hard to keep it hidden so that its meddling in Yemen cannot be taken advantage of by its neighbor.

Abu Dhabi has released [new] official topographic maps which display part of Saudi territory as an annexation to the United Arab Emirates.

The Islamic Republic News Agency (IRNA) on September 12 published a report on a border dispute between Saudi Arabia and the UAE quoting the Arabic-language Alwaie News Agency as saying that informed sources in the Persian Gulf have suggested that a crisis is brewing between Riyadh and Abu Dhabi behind the scenes. The following is the translation of the report:

Informed sources in the Persian Gulf, who asked not to be named, further said that Saudi Arabia is insisting on keeping its border dispute with its neighbor unrevealed at a time when the Yemeni question has cast a shadow on the Persian Gulf region. That’s why Riyadh has officially asked Abu Dhabi to explain its annexation of Saudi land without going so far as to lodge a protest.

The rulers in Saudi Arabia have expressed discontent with the UAE’s move at the current juncture, fearing that Abu Dhabi may seek to capitalize on the Saudi embarrassment and its insistence on not provoking any crisis with fellow Arab countries in the Persian Gulf, the same sources added.

Thanks to ongoing military action in Yemen and the possibility that Arabs may put boots on the ground in Yemen, Saudi Arabia is reportedly building on calm, wisdom and prudence to deal with the territorial dispute with its [southeastern] neighbor.

Following the death of Sheikh Zayed bin Sultan Al Nahyan, [the founder of the UAE], Abu Dhabi made its border dispute with Saudi Arabia public, calling for the annexation of part of the border with Saudi Arabia, the sources went on to say.

In response, Saudi officials said that the border dispute has been settled based on an agreement signed between Riyadh and Abu Dhabi in August 1974 [known as the Treaty of Jeddah]. Under the Jeddah agreement, the UAE would keep six villages in the area of Al Buraimi, and Saudi Arabia – in return – would have control over Khawr al Udayd, which spans a 25km expanse of coastal land. This area is home to 80 percent of oil wells in the Shaybah-Zarrarazone which has huge energy reserves: around 15 billion barrels of oil and 650 million cubic meters of gas.

In 1971, Saudi Arabia welcomed the departure of the British forces from the Persian Gulf region, but refused to recognize the United Arab Emirates. Riyadh said it would recognize the UAE if Abu Dhabi accepted to settle its border dispute with Riyadh. Back then, the UAE could do nothing but give up to the demands of the Saudi regime.