Sanctions do not erode hope and prudence: President 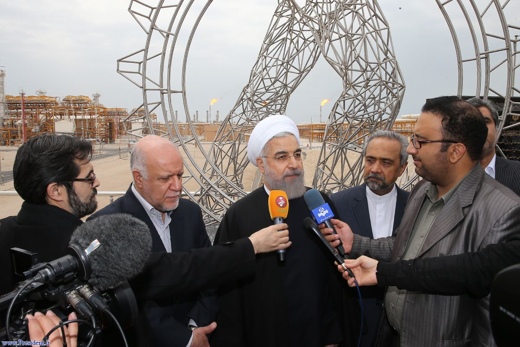 Iranian president has said sanctions played no role in bringing Tehran to the negotiating table.

The Iranian nation is walking down the path of self-reliance, economic independence and knowledge-based progress which are the building blocks of the resistance-based economy, President Hassan Rouhani told reporters Tuesday after the inauguration of Phase 12 of South Pars gas field.

In comments aimed at P5+1, the president said inauguration of a megaproject like Phase 12 of South Pars shows that sanctions were not the reason why Iran decided to sit at the negotiating table. [If sanctions had been effective] Such great projects would not have come on stream. We managed to complete these great projects when we were subjected to sanctions.

The president admitted sanctions created some problems for the country, but said they were unable to interfere with its overall progress. “The reason why we agreed to hold talks was to serve everyone’s interest. Conclusiveness of the talks would serve the interests of the region, P5+1 and the entire world.”

President Rouhani further said, “Inauguration of this project proves to the world that gone are the times when sanctions and pressures were effective on the international stage.”

Later at a gathering of oil and gas industry officials, the president said his government pins hope on no one other than God and members of the public and that sanctions do nothing to erode hope and prudence.

He said local experts have implemented the better part of the project on their own and that when foreign contractors stopped honoring their end of the bargain, Iranian experts pitched in and picked up the work where it was left off by foreigners.

President Rouhani said he has told leaders of five countries engaged in talks with Iran over the nuclear issue that sanctions are illegal and against human rights principles.

In conclusion, he said nuclear talks will produce results sooner or later.