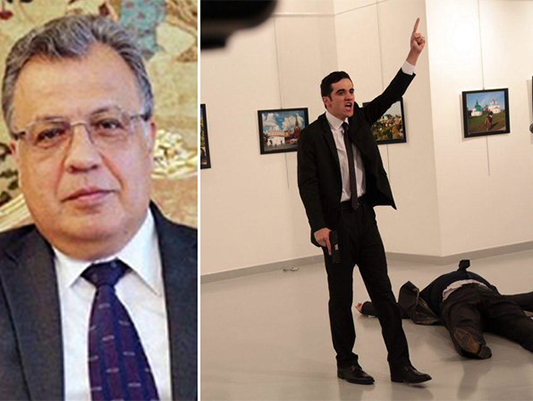 Russian ambassador to Turkey Andrey Karlov who was badly wounded in an armed assault in Ankara has died, Russian Ministry of Foreign Affairs said in a statement on Monday.

Russian sources quoted the Foreign Ministry as saying that Moscow views the murder of Russian Ambassador in Ankara as a terror attack.
“We qualify what happened as a terror attack. We are currently in contact with Turkish authorities who are assuring us that a thorough, comprehensive investigation will be conducted.” Russian Ministry of Foreign Affairs spokeswoman Maria Zakharova said.
The attack took place at the opening of the “Russia through Turks’ eyes” photo exhibition.

The Ambassador was not taken to the hospital immediately after the attack. It was reported that he received medical help on the site first and was rushed to the hospital after that.
The terrorist was also shot dead on the spot.
“Today is a tragic day in the history of Russian Federation,” Zakharova said in a statement. “Today in Ankara, during a public event, Russian Ambassador Andrey Karlov was shot and, shortly after that, he died.”
Russian Ministry of Foreign Affairs said that it is receiving condolences from foreign colleagues, Sputnik reported.
Andrey Gennadievich Karlov was born in 1954. He was appointed Russia’s Ambassador to Turkey in 2013.