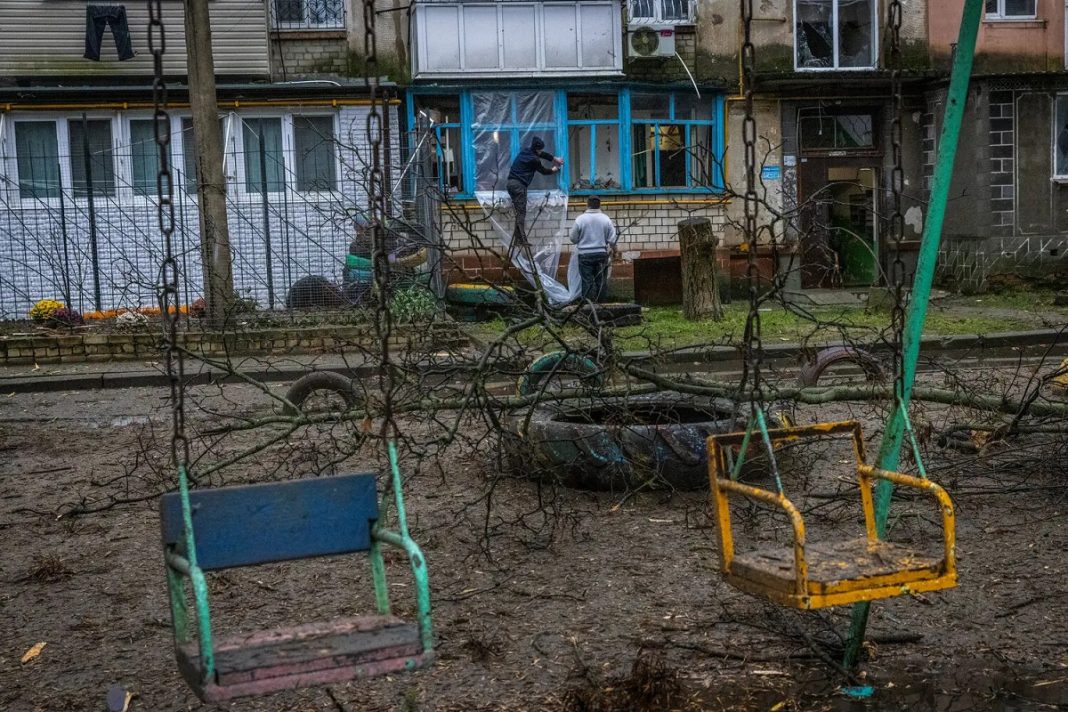 Prime Minister Giorgia Meloni has repeatedly pledged to keep supporting Ukraine, despite frictions within her ruling coalition and a divided public opinion on the issue of arms supplies.

“I am aware that military aid will have to end sooner or later, and will end when we will have the peace talks that we are all hoping for,” Defence Minister Guido Crosetto said as he addressed the upper house, Senate.

“There is no doubt that we all want peace, but this goal cannot be pursued without providing assistance to a country facing unilateral aggression in violation of international law,” Crosetto added.

The Black Sea port of Odesa did not operate on Sunday, and the ports of Chornomorsk and Pivdennyi only operated partially.

“‘Grain Initiative’: eight vessels with 238,600 tonnes of agricultural products for Asia and Europe left the ports of Greater Odesa,” the infrastructure ministry said on Telegram.

It added 690,000 tonnes of agricultural products would be loaded onto 23 other vessels in the ports in the Odesa region.

The ministry said 550 vessels with food had left Ukrainian ports so far under the initiative, exporting 13.8 million tonnes of Ukrainian agricultural products to Asia, Europe and Africa.

The money will come from tariff revenues collected on imports from Russia and Belarus, Freeland said at the Standing with the Ukrainian People conference in Paris.

“Putin and his henchmen are war criminals, and they are attempting to use the cold as a weapon to break the spirit of the remarkable people of Ukraine,” Freeland stated.

The support from Canada “will help ensure that Ukraine can secure its energy infrastructure and make it through the difficult winter to come,” she added.

The Group of Seven nations announced on Monday they would set up a multi-agency platform to coordinate aid to Ukraine and support its repair, recovery and reconstruction.

Iranian-manufactured drones played a central role in attacks on civilians, the British government said, citing US information showing Iran has become one of Russia’s top military backers, sending hundreds of drones to Russia.

Tehran and Moscow have denied Western accusations that Russia is using Iranian drones to attack targets in Ukraine.

Among those sanctioned is Major General Robert Baranov, believed to be the commander of a unit responsible for programming and targeting Russian cruise missiles.

Kremlin spokesman Dmitry Peskov stated progress would not be possible without considering these realities, including Russia’s capture of territories from Ukraine.

Peskov responded to a request by Zelensky to G7 countries on Monday for more military equipment, financial and energy stability support, and backing for a peace solution that would start with Russia withdrawing troops from Ukraine.

Russia has repeatedly announced it is willing to hold peace talks but does not see Ukraine and the West as ready to negotiate.

He stressed that his country needed an additional €800m to survive the winter and €1.5bn to restore the long-term damage to the energy grid.

The aim of the conference is to set up an international coordination mechanism to ensure the 800 million needed secures Ukraine the right mix of generators, transformers, equipment for the restoration of high voltage networks, and gas turbines.

Zelensky vowed that “we will do everything to counter the blackout and the energy terror. Most of our power plants are damaged or destroyed by the bombings.”

French President Emmanuel Macron is hosting about 70 countries and institutions to discuss what can be offered between now and March to maintain water, food, energy, health and transport amid freezing temperatures.

“Since Ukraine has got back on top on the ground, Russia, whose military weaknesses have been exposed, has adopted a cynical strategy that targets civilian infrastructure to bring Ukraine to its knees,” Macron said in his opening speech.

“For each of your country’s victories on the ground, Russia’s cowardly response is to bomb power, gas or water infrastructure necessary for the people’s survival this winter,” Macron stated.

He added that France would provide 63 electric generators on top of the 100 delivered in November.

The president noted that with an additional 48.5 million euros, French aid would reach 200 million euros this year.

Russia has not placed weapons at Zaporizhzhia plant: Kremlin

The Kremlin announced that Russia has not placed heavy weapons at the Zaporizhzhia nuclear power plant.

In a conference call with reporters, Kremlin spokesman Dmitry Peskov also said Russia remains in contact with the International Atomic Energy Agency (IAEA), which is trying to broker the creation of a demilitarised zone around the power station.

Kyiv has repeatedly accused Russian forces of using the nuclear facility, which Russia seized early in the conflict, as a de facto weapons depot.

But both sides have accused each other of shelling the plant, Europe’s largest nuclear power station.

Germany to provide Ukraine with €50 million in aid

Baerbock stated Berlin was working to deliver generators, blankets and heating fuel to Ukraine over Christmas, as Russia’s pummelling of power facilities causes power shortages in many parts of the country.

“We will not allow” Russia’s president, Vladimir Putin, to break the people of Ukraine, she told reporters at a donors’ conference in Paris.

French President Emmanuel Macron said on Tuesday that there was an agreement on removing heavy weapons from Ukraine’s Zaporizhzhia nuclear power plant and that talks were underway on the modalities around this.

“We managed to protect Chornobyl and our goal is to protect Zaporizhzhia. The coming weeks will be crucial,” Macron stated, as he arrived to attend an international conference.

France is hosting an international conference in Paris to provide urgent aid to help Ukraine get through freezing winter temperatures as Russian forces target civilian infrastructure across the country.

Ukrainian President Volodymyr Zelensky asked the Group of Seven leaders to maintain its support for Ukraine next year while outlining three steps for securing peace.

In a video statement, Zelensky said the first step is a “new force,” and he requested more military equipment from the G7.

“Russia still has the advantage in artillery and missiles, this is a fact,” Zelensky stated in his statement. “Ukraine needs modern tanks — and I ask you to provide this defensive capability to us. It can be done right now.”

“The more effective we are with such weapons, the shorter the Russian aggression will be,” he continued.

The second step, according to Zelensky, was for the leaders to maintain financial, energy and social stability next year. He also asked the G7 to commit to increasing the assistance of gas to Ukraine.

“The terror against our power plants forced us to use more gas than expected. This is why we need additional support over this particular winter,” Zelensky underlined.

“We are talking about the volume of about 2 billion cubic meters of gas that has to be procured additionally,” he underscored.

In the third and final step, Zelensky said Ukraine would like to offer a peace solution, beginning with asking Russia to start withdrawing troops this Christmas.

“I propose Russia to take a concrete and meaningful step toward a diplomatic settlement, which is being mentioned by Moscow so regularly,” he continued.

“This is the time for normal people to think about peace, not aggression. I suggest Russia to at least try to prove that it is capable of abandoning the aggression,” the president added.

“If Russia withdraws its troops from Ukraine, it will ensure a lasting cessation of hostilities,” he noted.

Earlier on Monday, G7 leaders pledged to give “unwavering support for and solidarity with Ukraine” by promising to boost the country with military and air-defense systems, condemning Russia’s ongoing “war of aggression.”

EU agrees to adding names to Russia sanctions list, but no deal yet on sanctions package

European Union foreign ministers agreed in principle to add about 200 Russian people and groups to a sanctions list, even if a whole ninth package of sanctions wasn’t approved yet, EU foreign policy chief Josep Borrell has said.

“What we have already approved is the individual sanctions … to about 200 individuals and entities,” he told a news conference.

“This is approved, it is going to hit hard the Russian defence sector and the Russian military. It is going to hit also the political masters of the Russian government, in the Duma, in the Federation Council and in the judiciary. We are targeting those responsible for looting the Ukrainian grain, and for the deportation of Ukrainian people and in particular children,” he continued.

The bloc’s foreign ministers, however, could not yet adopt the full package of new sanctions proposed by the European Commission, diplomats have stated.

Borrell added there had been disagreement on some of the content and its possible impact, but did not go into details. He said he hoped it could be approved later this week.

Biden: US will continue “sending material” to Ukraine, but not troops

US President Joe Biden has stated that there are no plans to send US troops to Ukraine.

“Are we sending troops to Ukraine? No, we’re sending material, like we have, millions of dollars,” Biden told reporters traveling with him in Virginia following a question about whether his administration is planning on sending to troops to Ukraine.

In November, the Biden administration called on Congress for additional funding to continue to support Ukraine.

The Ukraine request is spread across four US government departments, according to a fact sheet shared with CNN. Young wrote to Pelosi that the request would “ensure Ukraine has the funding, weapons, and support it needs to defend itself, and that vulnerable people continue to receive lifesaving aid. The request also addresses the critical global food and energy shortages caused by Russia’s invasion.”

Russia could resume business with Germany if it ends Ukraine war: Scholz

German Chancellor Olaf Scholz has said that economic cooperation between Germany and Russia could be possible again if the Kremlin ended its war in Ukraine.

Scholz has stated in previous speeches that the West would not lift sanctions imposed on Russia in response to its invasion of Ukraine until Moscow withdrew its troops from Ukraine and reached a peace agreement with Kyiv.

“At the moment the relations we have are being reduced, reduced, reduced,” he told the German Committee on Eastern European Economic Relations, referring to western sanctions on Russia that have quashed bilateral trade and investment.

“A Russia that ends the war”, Scholz noted, should be given a chance for renewed economic cooperation.

The Group of Seven (G7) economic powers have noted they would continue to work together to bolster Ukraine’s military capabilities, with an immediate focus on air defence systems, according to a leaders’ statement released by Britain.

“We will continue to coordinate efforts to meet Ukraine’s urgent requirements for military and defence equipment with an immediate focus on providing Ukraine with air defence systems and capabilities,” the statement said.