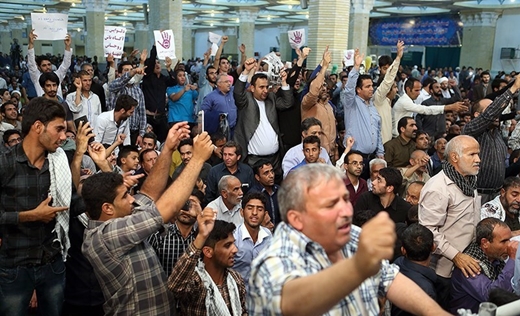 Eleven people were taken into custody for interrupting the president earlier this month. They were later released after promising not to disrupt public speeches again.

An official with the Interior Ministry has said that the IRGC has identified 11 suspects who interrupted President Rouhani’s speech at the Imam Khomeini Mausoleum in early June, adding that the hecklers have been released after one day in custody on a promise not to interrupt public speeches again.

The following is the translation of a report by entekhab.ir on June 22 on what else Javad Zarrinkolah said in a news conference on Sunday about the one-day detention of those who shouted down the president back on June 3:

Javad Zarrinkolah, who is in charge of security affairs at the Interior Ministry, said that those who were taken into custody had acted on their own and were not led by any [political] group, adding since 2009 [presidential elections] marginal issues have plagued the ceremonies to mark the demise of the late Imam.

He further said the ministry is trying to reduce these marginal issues to zero.

As for the funeral procession of 175 martyred Iranian divers and disruption of the ceremony [by some who hurled insults at the president and parliament speaker], he said that the funeral procession had not been coordinated with the Interior Ministry and Tehran’s Governor-General Office, adding the ministry will pursue the event and its incidents.

Asked about an illegal gathering outside the Ministry of Sports and Youth [over a plan which could possibly allow women to attend sporting arenas], Zarrinkolah said that the question of banned gatherings is on the ministry’s agenda.

He said the secretariat of the Supreme National Security Council is drawing up the guidelines which could plug the [legal] loopholes of the Authorized Assembly Act, adding it would be ready after the holy month of Ramadan so that we can put an end to lawlessness in this regard.

The Interior Ministry official also touched upon the 2014 acid attacks in Isfahan and said that one suspect was arrested two days ago and that the case is still under investigation.

He then talked about insult by a eulogist to Ayatollah Hashemi Rafsanjani and President Rouhani and said that an investigation would be launched into the case if those insulted pressed charges.

Zarrinkolah concluded that the number of crimes committed across the country in the year to March 21, 2015 posted a 20 percent decrease, adding that larceny registered the sharpest drop last year.