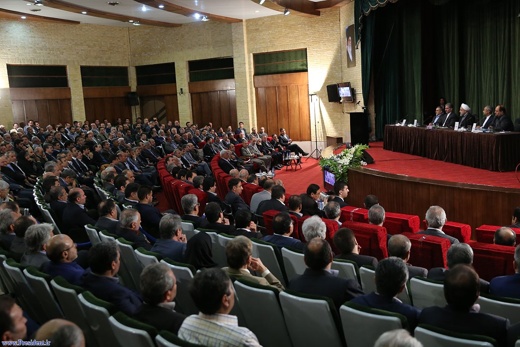 President Rouhani has said that Iran is not after aggression and retaliation and wants good ties with the world and its neighbors.

President Hassan Rouhani said his government is reflecting the positive image of Iranians as a peace-loving and civilized nation to the world.

He made the comments on Wednesday addressing a meeting of businessmen and investors in Tabriz, the capital of the East Azerbaijan Province.

Rouhani stressed the need to strengthen ties with neighboring countries and said that Iran has never shown aggression against [or hostility toward] any country and it will not. The Iranian nation favors peaceful co-existence with its neighbors”.

“We are not after aggression and retaliation and want good ties with the world and neighbors,” he added, referring to Iran’s policies in the wake of the fall of the Soviet Union and Iraq’s invasion of Kuwait.

If there is a problem, Iran wants to settle it and create a better condition, he said.