Rouhani describes countering infiltration as a national, not factional issue 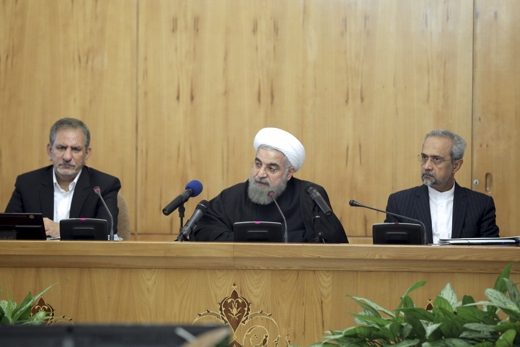 President Rouhani has said that the Iranian nation walks down the path of revolution, independence and resistance and stands united in the face of the outsiders.

An occasion like November 4 [Student Day] complements Iran’s defiance of excessive foreigner demands in the course of the Islamic movement, President Rouhani told his Cabinet Wednesday.

According to president.ir, the president further said historic occasions which mark Iran’s defiance of foreign powers should be used to further national unity. “We should not allow such historic events to be hijacked by certain factions, because any factional use of these events would be to the detriment of the revolution and national unity.”

The following is a translation of highlights of President Rouhani’s remarks marking National Day of the Fight against Global Arrogance:

November 4 is a historic day for the Iranian nation which marks the beginning of a new era in the Islamic movement.

What the students did on November 4, 1979 was a reaction by the Iranian nation to the US plots aimed at harming the revolution. The Iranian youngsters proved that the Islamic Revolution does not belong to a certain group.

Up until November 1964, the Islamic movement was more of an anti-tyrannical nature, but a new wave was created in the county against colonialism when the Capitulation law was introduced and Imam Khomeini made a revealing speech on the colonial plan which was hatched against the dignity of the Iranians and questioned Iran’s political and judicial independence.

People know well about the meaning of infiltration, colonialism, history and the US mistreatment of Iran, and they know about the country’s national interests and future. We need to seriously and genuinely counter the infiltration of the outsiders. Certain people should not play with the word ‘infiltration’.

The Supreme Leader belongs to the entire Iranian nation, not to certain groups or institutions. … The Iranian nation walks down the path of revolution, independence and resistance and stands united in the face of the outsiders.

We need to try to develop an accurate understanding of and implement what the Supreme Leader says. We should not let certain individuals use his words to score personal, collective and factional points. People are well aware of the situation and monitor what is unfolding, and knowingly make their presence felt when it is needed – like in elections – and speak their mind.