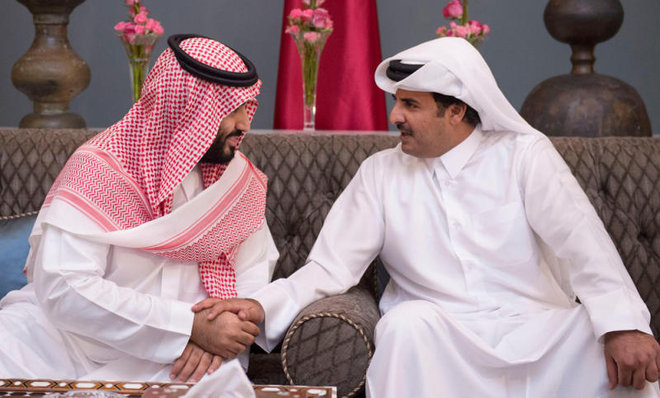 Reports suggest Saudi Defence Minister Mohammed bin Salman has travelled to Moscow to replace Qatar with Russia in its military alliance! Now that Saudis see themselves as the losers in recent developments, they are seeking revenge on Qatar. This desire for vengeance will shed light on what was going on behind the scenes between the two countries.

The Saudi Al-Riyadh newspaper has, in a report titled “5 Coups in 46 Years … The 6th Coup Is Not Unlikely,” has discussed the issue of Qatar and threatened to oust the Qatari emir. The daily claimed that members of the Al Thani family (Qatar’s main rulers and cousins of Tamim, the current ruler of Qatar) have, in a letter to the Saudi king, disavowed the orders by their “thoughtless emir”. The controversy was due to the ‘insulting’ cartoon shared by the Al Jazeera TV’s twitter.

In an open threat to overthrow the Qatari government, the Al-Riyadh newspaper wrote that the “letter by the Al Thani family shows the depth of rifts within Qatari rulers as family members themselves have announced that they are fed up with Tamim bin Hamed’s policies and it is likely that a new coup will take place within the Qatari government, and during the coup the main ruling family will take helm of the affairs.”

According to the daily, those who have followed the history of Qatar since its independence in the 1970s are well aware of the coup scenario and rifts within the country’s rulers. The story of the coup d’état against the Ahmad bin Ali Al Thani’s family goes back to Khalifa bin Hamad, who waged a coup in 1972, and the Ahmad bin Ali family has not assumed power in the country ever since. In fact, the Bin Ali family sent the letter to bin Salman.

In the meantime, Salman al-Ansari, the head of the Saudi lobby in the US, also in an open threat against Sheikh Tamim bin Hamed Al Thani predicted that he will end up having the same fate as Mohamed Morsi’s in Egypt and could face a similar military coup.