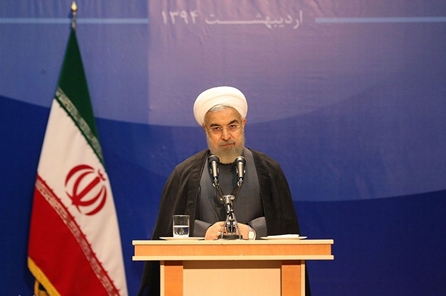 President Rouhani stressed the need for efforts to deepen the national cultural identity and called for scientific independence and freedom for Iranian universities.

President Hassan Rouhani on Tuesday termed Iranian scholars and academics residing inside or outside the country as national assets and urged officials to highly respect them.

Speaking at the Islamic Azad University (IAU), he praised the role of this university in promoting higher education in Iran.

President Rouhani stressed the need for efforts to deepen the national cultural identity and called for scientific independence and freedom for Iranian universities.

He urged officials to make it possible for Iranian scholars residing abroad to get employment in Iranian universities and research institutes, particularly in the Islamic Azad University (IAU).

The President said everybody in the country should show respect and tolerance towards academics and scholars who are residing inside or outside the country even if they have a different attitude which contrasts with official views.

Headquartered in Tehran, the Islamic Azad University was founded in 1982 by Akbar Hashemi Rafsanjani, currently has 1.5 million students.

Azad University has over 100 branches across the country and also in other countries. It has branches in the UAE, the UK, Tanzania, Lebanon and Armenia and has plans to establish more branches in Malaysia, Canada, Afghanistan and Tajikistan in the near future.