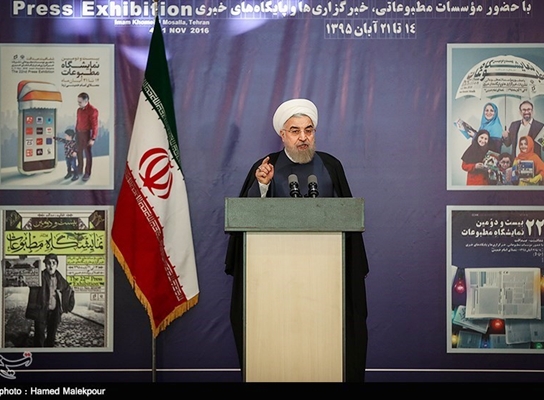 Iranian president says the Islamic Republic is enjoying good security and stability amid the ongoing regional crises due to the “vigilance” and “awareness” of the nation, which can be enhanced by media professionals.

“Undoubtedly, what has created the security in our country is (the people’s) alertness, vigilance, awareness and internal solidarity,” President Hassan Rouhani said on Saturday in an address to the opening ceremony of the 22nd edition of the Press Exhibition in Tehran.

“Media, culture, and art professionals should promote security in the society,” President Rouhani said, stressing that security is not just assured through the power of bullet.

“The power of culture is way beyond that of bullet and diplomacy. Media are responsible for propagating this culture in the cyber space and among the society,” he went on to say, as translated by IFP.

He added that terrorism in the region stems from an incorrect understanding of Islam and Islamic Jihad, stressing that what can protect the region from insecurity is for people’s refusal to listen to voices of extremism, Tasnim reported.

Representatives of more than 900 newspapers, news agencies and media outlets have attended the expo.