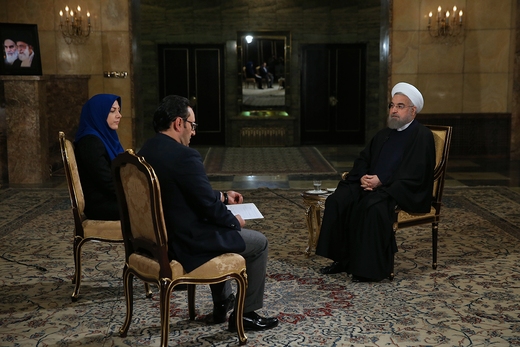 Iranian President Hassan Rouhani said that conditions for interaction with the world have changed drastically introducing tourism industry as a sector that generates employment.

Speaking on a televised interview on Tuesday, he called for a national will to develop the country in the post-sanctions era and said, ‘It is not the case that economy will be corrected only through foreign interaction. This is 40 percent and the (remaining) 60 percent is related to inside the country.’

He said that the focus of recent contracts signed during his visits to Italy and France has been attraction of foreign investment and exporting 30 percent of the products under the contracts.

‘It was decided that foreign investors can enter the country and have partnership with our domestic investor and industry. The government will facilitate introduction of the private sector.’

‘In oil, gas, petrochemical, steel, and car industries, we are not going to spend the oil revenues, rather we support introduction of foreign capital and we stress domestic entrepreneurs.’

Supporting the deal on purchase of 12 long-range passenger aircraft out of total 140, the president said that they are needed for transferring people to long distances and that passesngers will pay for them.

‘We caree for the health and security of people not only in planes but also in car industry and railroads where we have comprehensive plans with China and Italy.’

He said putting 8 percent as the target of economic growth during the upcoming five-year development plan is a welcome figure so that unemployment and inflation will be settled.

The president also said that Iran is for constructive relations in foreign policy with Asian, European and Latin American countries, adding that even US entrepreneurs that can invest in Iran and import technology, will have no problem.

He also said that while Iran will not forget its friends that maintained relations with Tehran during imposition of sanctions, it will not seek taking revenging from other countries either.

‘We will mostly view the opportunities before us despite the fact that they did not behave properly. We will cooperate with them if they make up for past.’

He said Iran is not interested in tension with its neighbors provided that they stop creating tension in the region.

‘Of course, if they continue such acts, it will harm them. And if it is deemed necessary, we will have a decisive response. One-way friendship is not possible. If a country wants to harm our national interests, we will respond.’

To a question, Rouhani said Iran regards the fight against terrorism one of the necessities for stability in the region and said, ‘In any regional country, Iraq or Syria, our objective is to assist the people so that they can step out of the problems faced with terrorists.’

‘Unfortunately, there are countries that are knowingly or unknowingly supporting the terrorists… The future of Syria and settlement of its issue lies in political talks and will not conclude with military power.’

He said there is difference of view over who is opposition and who is terrorist in Syria and added that this problem needs to be settled.

Rouhani said that there are certain countries which are after tension with other countries out of the illusion that it will help them. ‘But I think a tension will not be in the interest of any country in the region.’