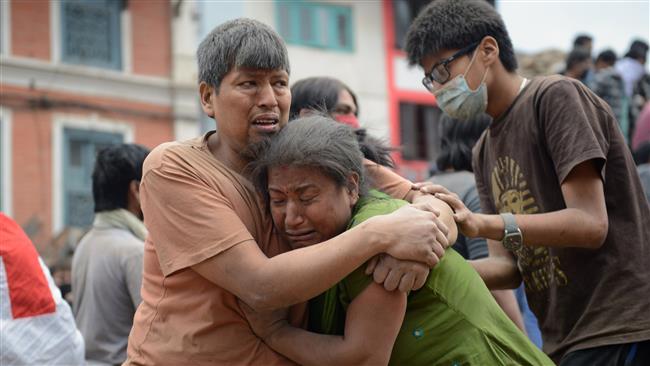 President Rouhani has offered condolences to the Nepali people for Saturday’s killer earthquake, wishing swift recovery of the injured and patience for the bereaved families.

Iran’s President Hassan Rouhani has offered condolences to the Nepali people for a devastating earthquake which has killed over 1,800 so far.

The Iranian president offered his “sympathy and condolences” to the people of Nepal and President Ram Baran Yadav over the deadly earthquake on Saturday.

Rouhani wished swift recovery of the injured, and patience for the bereaved families.

Earlier in the day, Iranian Foreign Ministry Spokeswoman Marzieh Afkham conveyed deep sorrow over the deadly earthquake and offered Iran’s sympathy to the Nepalese government and the families of the victims.

Iran has also said it is prepared to send assistance and aid to Nepal’s quake-hit regions.

The Iranian Red Crescent Society has called on Kathmandu to inform it of its aid requirements.

International aid groups have also rushed to Nepal as rescue efforts have been hammered by aftershocks and severed communications.

“We do not yet know the scope of the damage, but this could be one of the deadliest and most devastating earthquakes since the 1934 tremor which devastated Nepal and Bihar,” said Jagan Chapagain, Asia-Pacific director of the International Federation of the Red Cross and Red Crescent Societies (IFRC).

The IFRC also voiced concerns over the plight of villages close to the quake epicenter, some 80 kilometers from the capital Kathmandu.

“Roads have been damaged or blocked by landslides and communication lines are down preventing us from reaching local Red Cross branches to get accurate information,” added Chapagain.

A massive earthquake measuring 7.8 on the Richter scale shook Nepal near its capital with aftershocks continuing through the region hours later.

According to the country’s Home Ministry, 1,805 have been killed and 4,718 injured by the powerful earthquake so far, but many more are feared dead under rubble as rescue efforts are underway to pull out the victims.

According to the country’s information minister, Minendra Rijal, the death toll could reach 4,500 during the next 24 hours.