President: No world power can decide for Iran 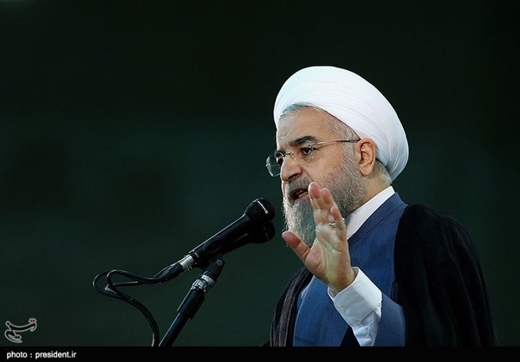 At a meeting with senior IRGC commanders, President Rouhani described Western sanctions imposed on the Islamic Republic as cruel.

Iranian President Hassan Rouhani praised the country’s independence after the Islamic Revolution in 1979, saying that today, no world power can decide for the Islamic Republic in the international arena anymore.

Speaking in a gathering of commanders and officials of the Islamic Revolution Guards Corps (IRGC) in Tehran on Tuesday, President Rouhani emphasized that before the Islamic revolution, global superpowers would interfere in Iran’s internal affairs and decide for the country.

That era is gone, he said, adding, “Today, there is no power or superpower that can decide for the establishment anymore… nor would we allow them to do so.”

Pointing to the successful conclusion of nuclear talks with world powers, which will result in the termination of the anti-Iran sanctions, he said the Iranian nation managed to put an end to the embargos thanks to the guidelines of Supreme Leader of the Islamic Revolution Ayatollah Seyyed Ali Khamenei and the bravery of the country’s armed forces.

Iran and P5+1 (Russia, China, the US, Britain, France and Germany) on July 14 reached a nuclear agreement that would terminate all sanctions imposed on Tehran over its nuclear energy program once it takes effect.