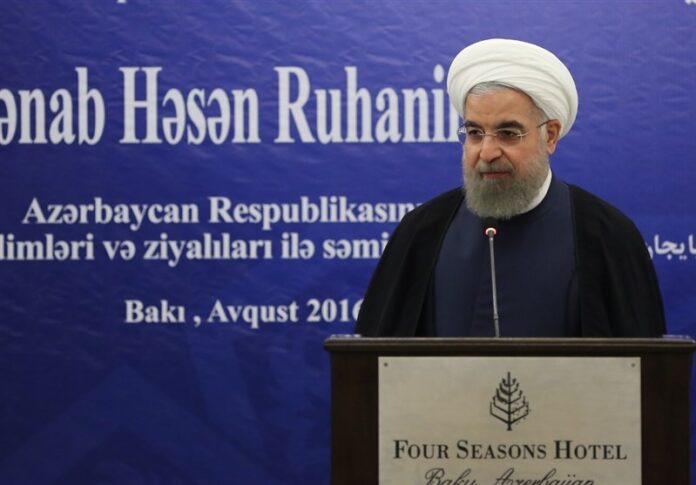 Iranian President Hassan Rouhani reaffirmed Tehran’s commitment to assisting the Muslim people at their request for any help in the fight against terrorists wherever they happen to be.

Iran will rush to help the Muslim people at any place if they ask for assistance in dealing with the terrorists, because it is considered as a duty, President Rouhani said in a gathering of Azeri clerics, held in Baku on Sunday night.

He also reminded the Muslim clerics of their heavy responsibility to save the Islamic society from intellectual deviation and try to portray the true image of Islam to the world.

The president then reiterated Iran’s support for peace, security and fraternity among the nations, stressing that all Sunni and Shiite Muslims are brothers and members of a same family.

President Rouhani, who is in Baku to attend a trilateral meeting with his Russian and Azeri counterparts, also had a meeting with a group of Iranian nationals residing in the Republic of Azerbaijan on Sunday night.

During the meeting, the president briefed the audience on the latest steps that Iran and Azerbaijan have taken to broaden ties.

The main decision following the high-profile meetings with the Azeri officials was partnership in the construction of the International North-South Transport Corridor (INSTC) and in a project linking Iran’s border city of Astara to the northern city of Rasht, President Rouhani added.

Earlier in the day, top officials from Iran and Azerbaijan signed six Memoranda of Understanding (MoUs) and agreements to promote mutual cooperation in a range of fields.