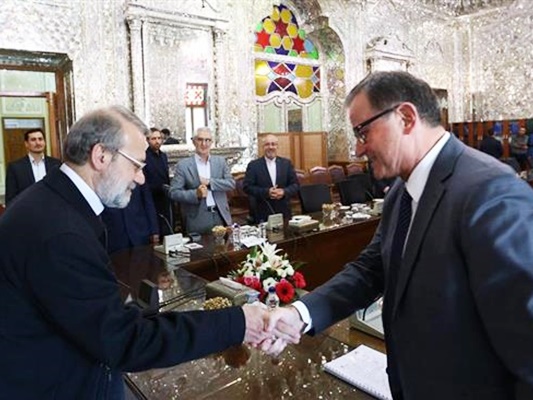 Iranian Parliament Speaker Ali Larijani has highlighted the significance of solving the current problems in the Middle East through political dialogue while avoiding any military approaches.

“Iran always stresses the importance of political dialogue and negotiations as the only solutions to the existing problems [in the region] instead of using military means,” Larijani said in a meeting with Second President of the Austrian National Council Karlheinz Kopf in Tehran on Sunday.

He said Iran and Austria have common views on many regional issues and are bolstering relations after the implementation of last year’s nuclear agreement, known as the Joint Comprehensive Plan of Action (JCPOA), between Iran and the P5+1 group of countries, which led to the lifting of nuclear-related sanctions on the Islamic Republic.

“Relations between Iran and Austria have always stood at a good level and are improving in economic and trade sectors after the JCPOA [implementation],” the top Iranian parliamentarian added.

He noted that the expansion of parliamentary ties would play a key role in strengthening cooperation between Iran and Austria, saying that the Iranian Parliament supports the development of relations. Iran and the five permanent members of the United Nations Security Council – the United States, Britain, France, China and Russia – plus Germany signed the JCPOA on July 14, 2015.

Under the nuclear agreement, which took effect in January, Iran undertook to put limitations on its nuclear program in exchange for the removal of nuclear-related bans imposed on the country.

Kopf, for his part, said his country attaches great importance to the expansion of political, economic and parliamentary ties with Iran as an important country in the region and the world.

He added that Iran plays a stabilizing role in the region and helps reduce conflicts and restore peace and stability to the Middle East.

The Austrian parliamentarian also expressed hope that his country would bolster cooperation with Iran on issues of common interest.

Kopf arrived in Tehran Saturday night for an official four-day visit at the invitation of the first vice speaker of the Iranian parliament, Massoud Pezeshkian. He plans to hold talks with senior Iranian officials.