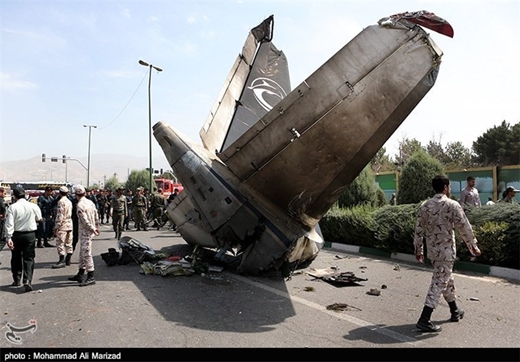 The pilot’s performance, malfunctioning of the engines' control system, and breaching the maximum takeoff weight were the main reasons behind the crash of an Iran-140 airplane.

One year after the fatal crash of Iran-140 airplane near Tehran, Iran’s Civil Aviation Organization (CAO) on Tuesday released the results of its investigation into the cause of the deadly accident.

The pilot’s performance, malfunctioning of the engines’ control system, and breaching the Maximum Takeoff Weight (MTOW) were the main reasons behind the plane crash, the CAO announced.

The excessive fuel of the plane also exacerbated the fire that erupted after the plane crash, Mohammad Shahbazi, the official in charge of the investigations said.

A team of air accident experts from Russia came to Iran to help with the investigations in March. A Ukrainian team had also visited the country to analyze the black boxes a couple of days after the crash.

Shahbazi announced that representatives of other companies such as Motor Sich and Progress (engine designer) have also taken part in the investigation.

He further noted that the final report on the tragic crash will be prepared within the next 45 days and sent to Russia and Ukraine to be analyzed.

The plane, an Iran-140 of Ukraine’s Antonov origin, crashed on August 10, 2014, west of Tehran, shortly after take-off from Mehrabad Airport.

The aircraft had 48 passengers and crew on board, of whom 39 died.

Hours after the crash, Iranian President Rouhani ordered the grounding of the entire fleet of the country’s Iran-140 planes.

According to Rouhani’s order, the ban will remain in place until full investigation is conducted into the cause of the crash.

The Antonov An-140 commercial passenger airplane is a twin-engine turbojet aircraft, which can accommodate up to 100 passengers.

After purchasing the production license for the An-140 from Ukraine in 2000, Iran built its first Iran-140 passenger plane in 2003.