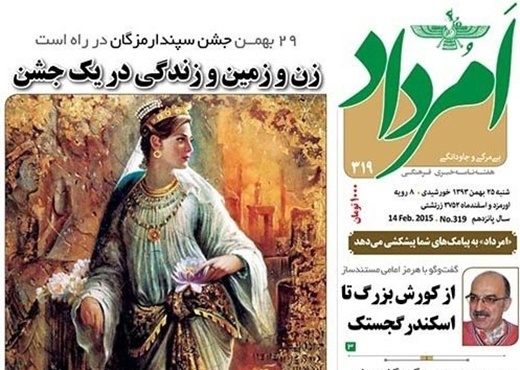 Iranians celebrate Sepandarmazgan in which women, the Earth and life which all have one thing in common – reproduction – are respected and praised.

Sepandarmazgan is a day Iranians observe in honor of love, affection and earth, each year.

Traditionally, the earth is praised and women are venerated during this day which is celebrated on the 29th of Bahman in the Persian calendar [February 18] . But does it have anything to do with the Western Valentine’s Day?

In its Feb 14th issue, Amordad weekly ran an opinion piece by Mobed Ardeshir Khorshidian, the head of Tehran’s Mobeds Association. He speaks about about the Persian Day of Love in this article, trying to clear up the confusion surrounding the Iranian celebration and the similar Western feast.

The following is a partial translation of the piece:

An underlying principle of Zoroastrianism – which is one of the foundations of this land’s [Iran] culture – is the equality of the rights of all humans, including men and women.

Sepandarmazgan is a Zoroastrian festival. The date of the festival as observed in the Sassanid era was on the 5th day of the month Spandarmad. Iranian always held “name-feast” celebrations when the name of the day and the month of the day coincided.

That said, Bahman 29 [February 18] has been designated as Mozdgiran [Esfandgan] or Sepandarmazgan; a day to show respect to mothers and women. Men would seat their beloved wives and daughters on the highest place on this day; offering them generous gifts which were spiritually invaluable. Persian men expressed their gratitude and love for the nearest and dearest in their lives this way.

On such an auspicious day, women were relieved of household chores. Instead, men would take charge of the housework to learn more about the importance of big responsibilities women shoulder in their lives, develop an understanding of women’s status, and express thankfulness for what women usually take care of.

In the Iranian culture, zan (woman), zamin (earth) and zendegi (life) have one root which means zayandegi (reproduction). Accordingly, [ancient] Iranians used to believe that “woman” is the embodiment of reproduction in the world.

Persian men used to call their wives as hamsar (spouse) which – in Farsi – means the one who is equal with her husband; as well as kadbanoo (housewife; the one who is good at housekeeping) which means the light and manager of the house. In the eyes of Iranians, women – like life and the earth – are of high and lofty value.

Recently, certain Iranian theoreticians have tried to call Sepandarmazgan* as the Iranian Day of Love in a bid to prevent people from marking the Valentine’s Day, which has nothing in common with the Iranian culture and religion. Although such a move is appropriate and conscientious, it has been pursued out of a lack of knowledge.

Mehregan; the Persian Day of Love

Iranians should know that the Day of Love for Persians is the day of Mehr in the month of Mehr which is celebrated as “Mehregan” [an Iranian festival celebrated in honor of Mithra, the divinity of covenant, and hence of interpersonal relationships such as friendship, affection and love. The festival falls on the 196th day of the Iranian year or 10th Mehr and 2nd October].

Mehr means love which comes with loyalty to [one’s] promise, and it cannot be confined to Jashne Esfandgan [the Esfandgan Feast is celebrated on Sepandarmaz Day] in which women [and mothers] are honored.

Iranians believe that beside harboring love for women and life, people should love the whole universe and its single and unique Creator. Therefore, the Iranians celebrate Mehregan- the Persian Day of Love- to honour the love for family members, relatives, coreligionists, fellow countrymen, fellow humans and all the symbols of goodness in nature.