On the Strong US Opposition to Brexit: Playing the UK Card in the EU 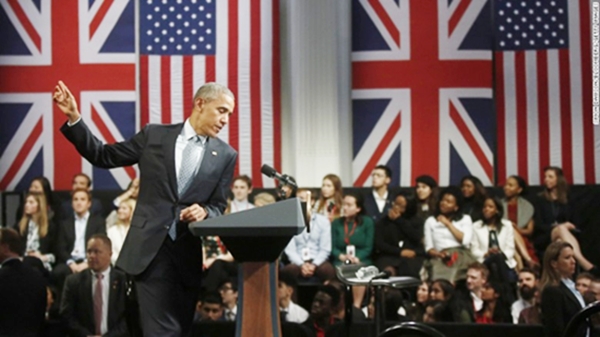 The United States insists that the United Kingdom should stay in the European Union. US President Barack Obama recently visited the country right after the 90th birthday of Queen Elizabeth II to tell Britons “You should stay with the EU”. Why does Washington want London to reject Brexit?

This is a question discussed by Mehdi Del-Roshan in a recent article in the newspaper Ghanoon. Here is IFP’s translation of the comment.

In less than two months, a referendum will be held in Britain to ask people whether they want the country to stay in the EU or not. Both the royal family and the government seem to be concerned about a possible vote of NO to Britain’s continued membership of the EU.

Although the Britons themselves suggested that the EU member states use a single currency, the Euro, they refused to adopt the new currency or replace their own one, the Pound Sterling.

However, they are still a member of Europe’s larger political family, and Brussels laws are binding in London.

Now, US opposition to Britain’s exit from the EU is an interesting topic. Some international analysts and observers say the US wants Britain to stay in the EU in a bid to wield the country’s power as a counter to the influence of Germany and France! This is something like the story of the famous film, The 51st State!

This means that the Americans want Britain inside the EU so they can pursue their own policies in Europe. In this view, Britain can prevent such leaders as Angela Merkel and François Hollande from opposing Washington.

During Obama’s visit to Britain, one interesting point was the unprecedented remarks by the Mayor of London. Boris Johnson launched an astonishing attack on Obama’s “ridiculous and weird” arguments for Britain to stay in the EU.

“It is very weird that the US should be telling the UK to do something they would not dream of doing,” he said, strongly criticizing the US president’s remarks.

He told the BBC the Americans “Wouldn’t dream of sharing [their] sovereignty” as the UK had done.

“I just find it absolutely bizarre that we are being lectured by the Americans about giving up our sovereignty and giving up control when the Americans won’t even sign up to the international convention on the law of the seas, let alone the International Criminal Court,” he further noted.

It could be true to some extent that Obama’s insistence on Britain staying in the EU is based on an economic “approach”; perhaps, that may only be half of the story.

This point can be seen in a warning by the International Monetary Fund (IMF) as well: Brexit could have harmful consequences for the fragile global economy.

On the other hand, the Transatlantic Trade and Investment Partnership (TTIP) is also an important factor here. This is a proposed trade agreement between the European Union and the United States, with the aim of promoting trade and multilateral economic growth.

Proponents of TTIP believe that it would help develop multilateral economic growth, while opponents say the treaty would increase the power of corporations and limit the power of governments to control the market in favour of society.

But what is Britain’s role in this game? The treaty has lots of critics. Which country should counter these criticisms? Which country is the number one ally and friend of Washington in Europe? The answer is clear: British friends!

Many believe that the US stands to benefit more than the EU if the TTIP is put into effect. Therefore, “a friend” should remove the obstacles!

Obama’s visit to the UK was definitely worth it, one that convinced the POTUS to make such a long trip to Europe in spite of all the domestic problems he faces in the last year of his presidential tenure.

US history might be proud of him in future for saving billions of dollars of profit for American citizens in the 51st State!