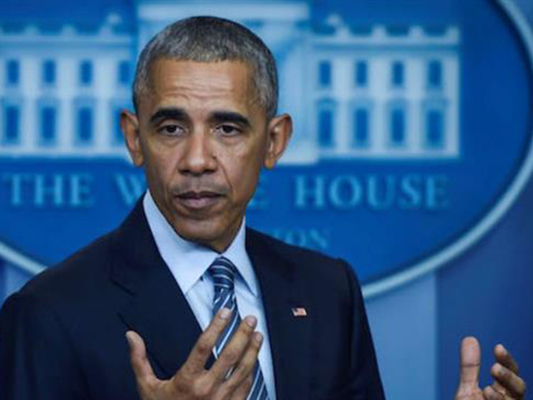 US President Barack Obama says his successor Donald Trump is unlikely to change a nuclear deal reached between Iran and the P5+1 group.

Republican Trump, who became US president-elect after defeating his Democratic rival Hillary Clinton in the election last week, had repeatedly promised in his campaign that he would scrap the deal struck between Tehran and the P5+1 – the US, Britain, France, China, Russia and Germany – in July 2015.

The deal, known as the Joint Comprehensive Plan of Action (JCPOA), went into effect on January 16, and resolved a long-running Western dispute over the Iranian nuclear program.

Obama said on Monday that after the deal was reached, there was an argument that Iran might not comply with the agreement, but so far it has been proven otherwise.

“The main argument against it was that Iran wouldn’t abide by the deal, (but) we now have over a year of evidence that they have abided by the deal,” Obama said at a White House news conference.

“My suspicion is that when the president-elect comes in and is consulting with his fellow Republicans on the Hill, that they will look at the facts,” he said. “To unravel a deal that’s working and preventing Iran from pursuing a nuclear weapon would be hard to explain.”

It is harder to undo “something that is working,” the outgoing president said, noting that “when you’re not responsible for it, I think you can call it a terrible deal…(but) when you are then responsible for the deal and preventing Iran from getting a nuclear weapon, you are more likely to look at the facts.”

Reza Najafi made the remarks following a report by IAEA Director General Yukiya Amano (pictured below) on Iran’s compliance with the JCPOA.

Amano’s report, which was sent to the IAEA Board of Governors and the United Nations Security Council, also noted that Iran had informed the IAEA of its plan to transfer five metric tons of heavy water out of the country.

Under the JCPOA, Tehran agreed to roll back certain aspects of its nuclear program — including the volume of its uranium stockpiles enriched to the 20-percent level — and provided international atomic monitors enhanced access to its nuclear facilities. In return, Iran’s partners agreed to terminate all nuclear-related sanctions.