A new face of the Assembly of Experts 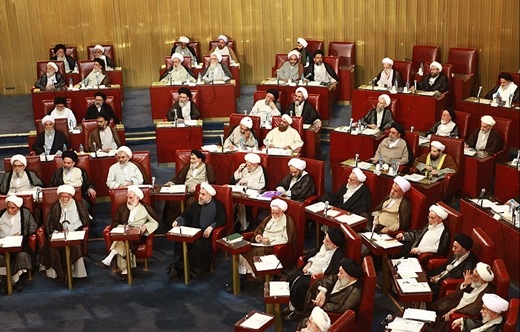 With almost one year to go before Iranians go to the polls to elect members of parliament and the Assembly of Experts, jockeying for position by political groups and factions seems to be already underway, unofficially though.

Hamshahri Mah magazine published an article in its 129th issue by Arash Ghavami on the new faces who may contest the seats in the upcoming Assembly of Experts. The following is the full translation of the article:

Early campaigning for seats in the Islamic Consultative Assembly is nothing new, because the vote provides a platform for political rivals to line up against each other.

But when it comes to the seats on the Assembly of Experts, in Iran’s political history intense rivalry is unprecedented, or less common to say the least. That the country’s two main political factions seek to drum up support and activate electoral mechanisms to garner a majority of seats in the Expert Assembly elections – like what they usually do in parliamentary polls – is a new phenomenon in Iran.

A council with few changes

The fact that since its establishment, the Assembly of Experts has chosen only three chairmen indicates that the assembly pursues a non-political and non-factional agenda. The chairs have been elected through consensus or picked in a one-man-show race. The late Ayatollah Ali Meshkini was chosen as the [first] chairman in 1982 when the assembly was established. After his passing, Akbar Hashemi Rafsanjani picked up the seat in 2007 and three years later Mohammad Reza Mahdavi Kani replaced Hashemi Rafsanjani.

To that end, in an interview with Al-Alam News Network [Iran’s Arabic news channel], Ayatollah Ahmad Khatami – a member of the assembly’s residing board – said Ayatollahs Hashemi Shahroodi, Yazdi, Jannati and Movahedi Kermani are the main candidates for chairmanship of the Assembly of Experts. He did not mention Ayatollah Hashemi Rafsanjani’s candidacy. “Mr. Hashemi Rafsanjani has said in certain quarters that he is unwilling to run for chairmanship of the assembly,” he said.

Ayatollah Hashemi Rafsanjani promptly reacted to the interpretation of Ayatollah Khatami. In an interview with Jomhouri Islami daily, a source close to Akbar Hashemi Rafsanjani quoted him as saying, “In case certain people whom I don’t think are qualified for the chairmanship of [the Assembly of] Experts intend to run for it, I will voice readiness to field my candidacy.”

In another move, the official website of the Chairman of the Expediency Council Ayatollah Hashemi Rafsanjani [hashemirafsanjani.ir] republished “I will run for Experts chairmanship” as its banner headline.

Although efforts were being made earlier to make the elections of the Assembly of Experts’ chairman and the agenda the body pursues nonpartisan, such rivalries show that a new atmosphere is likely to be in the making in the assembly which is an influential institution in the [Islamic] establishment.

Principlists and concerns about measures by the anti-revolution camp

Under such circumstances, principlists have sought in recent months to warn about the conditions of the upcoming elections. Ayatollah Jannati’s comments that the enemies of the Islamic revolution have set their sights on the Assembly of Experts are among the starkest warnings in this regard. He has said, “The enemies want to see individuals who do not stand up to acquisitive demands elected to the assembly. They have plans to achieve their ominous goal.”

Jannati, who was speaking in a congress of Velayatmadaran [the followers of the Supreme Leader] in Fars Province, added, “The enemies want a leader they approve of. They have plans for the next 10, 20, 50 or even 200 years. Thanks to divine assistance, they have not achieved their ominous goals.” (Fars, Feb. 8, 2015)

Other key principlists have offered analyses similar to Ayatollah Jannati’s and reacted to measures taken by their rivals for strong showing in the elections. Asadollah Badamchian, a key member of the Islamic Coalition Party, for instance, has said, “The [Experts Assembly] election is very critical this time. We need to enter the race vigilantly, knowingly and tactfully. A closer look at the electoral events clearly reveals that the enemies of the revolution want a Tunisia-style election. This has made the [upcoming] elections more important.”

He has also said, “They are trying to bring the Western-leaning Iranian elements to power. We need to be fully vigilant about the assembly’s elections … When two clerical mainstreams, namely the Society of Seminary Teachers of Qom and The Combatant Clergy Association, released a ticket, it would become clear that the Islamic Coalition Party officially supports the ticket.” (Mehr, Feb 2, 2015).

In fact, the principlists’ election strategy for the Assembly of Experts is to build solidarity [among fellow principlists] and have a pervasive, concerted presence [in electoral campaigning] to defeat efforts by reformists. This is pursued through maximal interaction between the two clerical mainstreams.

Just like principlists who are considering a concerted presence in the elections to defeat their rivals, the reformist camp too has launched efforts to mobilize their forces.

Mohammad Hossein Mousavi Tabrizi, the secretary-general of the Assembly of Qom Seminary Scholars and Researchers, recently stressed in the 13th congress of The Democracy Party of Iran that the reformist goals will be achieved only through [participation in] the elections. “We have to set aside egotism and take action for the parliamentary and Assembly of Experts elections.” (Fars, January 29, 2015).

Reformists seem to be going to try to put on their ticket the names of not-very- famous figures, or those who are not known for their reformist leanings, to be able to increase the number of votes they can poll, building on those figures’ jurisprudence and religious credentials.

Meanwhile, certain principlists have talked in their analyses about the division of labor in the reformist camp and their planning for participation in the elections for the Assembly of Experts and the Islamic Consultative Assembly. They have said that Ayatollah Hashemi Rafsanjani, Hojatoleslam Seyyed Hassan Khomeini and [former President] Mohammad Khatami will lead efforts for the Experts Assembly vote, and individuals close to the government will manage the parliamentary campaign.

Reports in this regard suggest that Hashemi will enter the race on a reformist-moderate ticket. The assembly elections seem to be of special significance to reformists and government officials. In the environment created following Hassan Rouhani’s presidential victory, the takeover by the reformists of the Assembly of Experts can tip the balance in their favor, improve their position in the establishment and [consequently] weaken some elements in the rival camp.

Assembly of Experts: political or non-political?

Does the pervasiveness of a factional or political mentality in the Assembly of Experts serve the interests of this institution? Does the assembly’s special position place it among the institutions like the Islamic Consultative Assembly which are formed on the back of a popular vote? Or the opposite, is the fate of this popular institution decided in a non-political environment and far away from the common political, factional strife?

Regardless of what the answer to these two questions might be, there is one interesting point: extension of political-factional rivalry – like what happens in presidential and parliamentary elections – to the Assembly of Experts elections amounts to departure from dogmatism and attention to the concerns and responsibilities of this influential institution.

That Ayatollah Hashemi Rafsanjani spearheads one camp and Ayatollah Mesbah Yazdi leads the anti-Hashemi camp is in fact a stark reminder of typical political antagonism. It deals a blow to the dignity and position of the assembly’s members as well as to the nature of their candidacy and the agenda they are pushing.

Still we can remain hopeful that the upcoming race will eventually take place in the form of rivalry between the two tickets put forward by the clerical bodies of the two [opposing] camps.

We also hope such rivalry does not fall into the trap of common political race in the country which usually comes with ill-temperedness and political grandstanding.