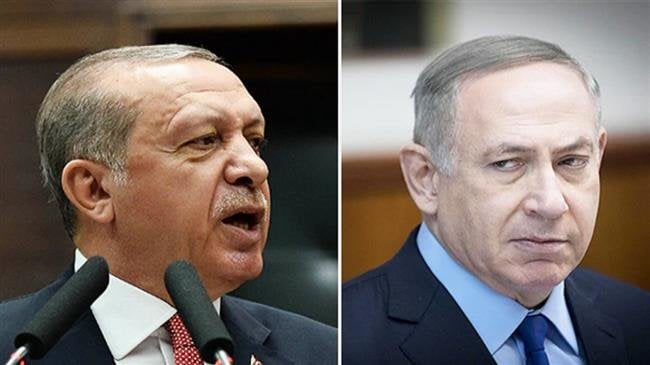 Israeli Prime Minister Benjamin Netanyahu on Saturday hit out at President Recep Tayyip Erdogan who told young Turks, “Do not kick the enemy you have brought down to the ground. You are not a Jew in Israel.”

Netanyahu said Erdogan was “the occupier of northern Cyprus, whose army massacres women and children in Kurdish villages, inside and outside Turkey” in a tweet late on Saturday.

Reacting to the Israeli rhetoric in a Tweet on Sunday, Turkish Foreign Minister Mevlut Cavusoglu called Netanyahu “a cold-blooded killer of modern times.”

“Bashing Erdogan or using Kurds as a political chip will not save him from his domestic troubles,” Kalin added.

Earlier this month, Erdogan likened Israeli atrocities against Palestinians to those perpetrated against Jews in the Nazi Germany.

He said Palestinians were being subjected to “pressures, violence and intimidation policies no less grave than the oppression done to the Jews during the Second World War.”

Turkey broke its diplomatic ties with Israel after an incident in May, 2010, during which Israeli commandos attacked a Turkish-flagged ship near the Gaza Strip, killing nine Turkish citizens.

The two sides exchanged ambassadors in 2016, but Ankara ordered the Israeli envoy to leave in May again over the Israeli military’s killing of Palestinian protesters in the Gaza Strip.