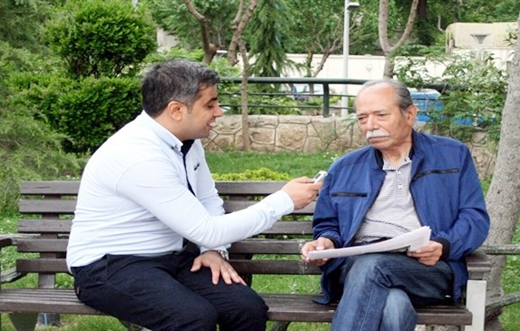 Prominent Iranian actor Ali Nassirian (born in 1924) is one of the few Iranian actors whose age has failed to prevent him from working, and he is still at the pinnacle of his cinematic and dramatic career.

The 82-year-old actor, accompanied by some other cineastes in the 1960s, was instrumental in creating Iranian New Wave cinema.

He assumed unforgettable roles in films in the years following the 1979 Islamic Revolution in TV programs, namely ‘Sarbadars’ (head on the gallows) by Mohammad Ali Najafi, ‘Hezar Dastan’ [1000 stories] by Ali Hatami, ‘The Scent of Joseph’s Shirt’ by Ebrahim Hatamikia and ‘Mirza Norouz’s Shoes’ by Mohammad Motevaselani.

At present, he is starring in the hugely popular DVD-released serial ‘Shahrzad,’ which continues to attract a large audience.

After six decades of continuous activity in theatre, TV and cinema, he still has a strong motivation to remain active, believing that humans should work till the very last moment of their lives.

Iran Daily interviewed Ali Nassirian to find out more about his six decades of cinema and theatre work. Excerpts of the interview follow:

IRAN DAILY: How much has theatre influenced your dramatic activity as well as your health?

ALI NASSIRIAN: Very much. Theatre provided us with technical training. Working in theatrical groups calls for a specific order and discipline, which are also helpful in other aspects of life. In addition, compared to cinematic projects, theatre paves the way for more experience in playing different roles.

Please tell us about ‘The Cow,’ which was selected as the best film in Iran’s cinematic history.

The film’s plot, which was new for cinema at the time, was the main reason for its success. Seeing a human transform into an animal (cow) due to emotional and economic factors was new in cinema.

Another issue was the strong collective motivation to make a good film. Once we were invited to participate in the project, we continued without any financial expectations. In other words, strong incentives are vital for creating a successful artistic production.

As you know, the film was one of the pioneers of Iranian ‘New Wave’ cinema. What were the factors that influenced the development of the movement?

In the mid-1960s, a number of new artistic activities emerged in painting, music and theatre. We also began our work as a young theatrical group.

Before the 1979 Islamic Revolution, some films including ‘Mr. Naïve’ and ‘The Cycle’ by Mehrjoui, ‘Tranquility in the Presence of Others’ by Nasser Taqvaei and ‘Hasan the Bald’ by Ali Hatami also explored new themes.

Given the present international status of Iranian cinema, how do you evaluate the future of the industry?

I believe that we should apply native Iranian perspectives to our cinematic productions. In other words, if we can do our best to make films for the Iranian audience, and they are welcomed internationally, that would be ideal. But it is not right to make films purely for recognition at international festivals. The more we think about our domestic needs, the better the films will be received by international audiences.

Do you think artistic cinema and box office cinema are two different things?

I don’t think they are completely independent. If an Iranian film is warmly accepted on the international scene, it will be more widely within Iran, and well-received too. Thus, the two are not unrelated and the interaction between them is crystal clear.

Since the revolution, you have starred in more than 20 cinematic productions and several series, TV programs and plays.

I have never liked to sit and watch other people working in cinema. I have been active throughout my life. Now, despite deteriorating health, I still like to work on different programs.

You wrote ‘The Wandering Nightingale’ in 1957, which won the best playwriting award. Why didn’t you continue writing plays?

At that time, I was more involved as a director and actor, and not an author. I began writing plays due to the absence of scripts for my own work. At that time there was no Akbar Radi, Bahram Beizai, Gholam-Hossein Sa’edi.

Thus, inspired by Sadeq Hedayat’s works, I wrote about ten pieces of drama, which were later used in my own performances.

My first play was ‘Golden Viper’ which was followed by ‘The Wandering Nightingale’. In 1961, I created Siah-bazi (a type of Iranian folk play featuring a black-faced harlequin who stirs the audience to laughter with amusing improvisations) as part of the modern theatre. Then I wrote ‘Black Play’ which illustrated the world of the Siah-bazi.

Anyway, I am more interested in acting in theatre rather than in writing plays. As for cinema, I neither like to direct nor write. I only enjoy acting in films.

Don’t you think your experience in cinema and theatre can help the younger generation or create a new attitude toward playwriting?

Perhaps it will. But at present we have many professional young people in the field of playwriting.

Your role in ‘Saturday’s Hunter’ by Parviz Sheikh Tadi has a specific religious attitude. Are religious issues important for you in selecting your role?

When I read the film’s scenario, two things were of great significance for me, the first was my complex role, and the second was the theme. It covers Palestinians and the oppressions imposed on them on the one hand, and religious dogmatism, as is evident in today’s terrorist group Daesh, on the other.

How did you accept the invitation to take up a role in the DVD release ‘Shahrzad’? Did you think it would be warmly-welcomed or not?

Once I read the first few pages of the plot, I figured out that it had the necessary characteristics for a fine home video program, and I knew that its director, Hassan Fat’hi, is not the kind of a man who would leave a project incomplete. Although many maintained that ‘Shahrzad’ would not be successful, I was optimistic about the wide appeal of the project from the very beginning. I must confess, though, that I did not expect such a high level of public enthusiasm for the production.

Why do you think ‘Shahrzad’, a serious, historical DVD serial, is being warmly received, while several home videos have not done so well?

Iranians are very smart people. Although some argue that people enjoy entertaining comedies for TV and home video, I personally believe that they can distinguish a serious from a cheap work, and that’s why ‘Shahrzad’ has been well-received.

The public support for ‘Shahrzad’ is great. I hope that the program’s success will lead to more private sector productions. Although TV programs are successful, a number of rules and regulations limit directors in presenting their artistic works freely. In other words, compared to TV programs, home videos and DVD releases have far fewer limitations.

Do you think home video is a potential rival for TV programs?

Yes, it is likely that if the production of appropriate and serious works continues, I think home video can have a positive impact on IRIB’s TV programs.