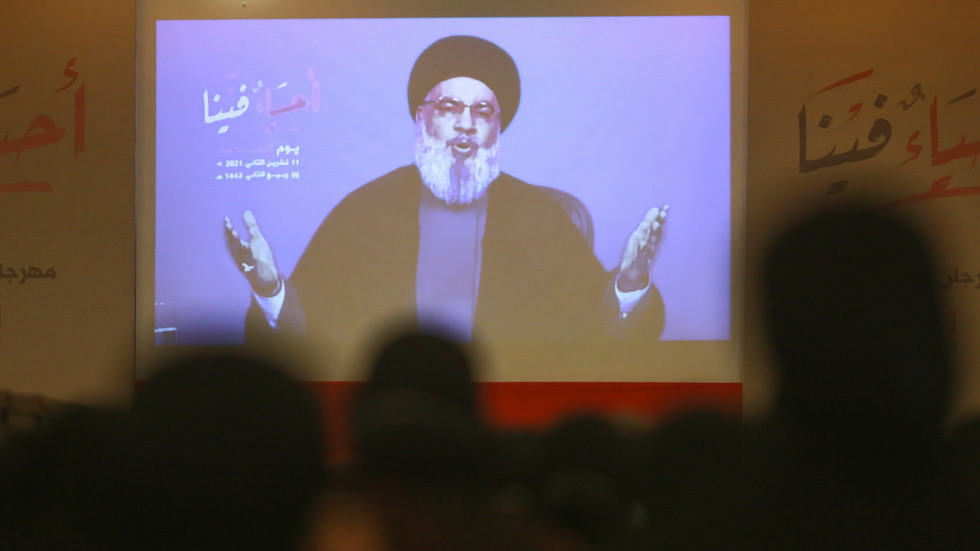 The secretary general of Lebanon’s Hezbollah resistance movement has accused Saudi Arabia of seeking to provoke civil war in Lebanon, saying Riyadh pretends to be friends with the Lebanese people and government while pushing its allies to stand against the popular resistance movement in the country.

Nasrallah made the remarks in a televised speech on Thursday, while addressing a ceremony held to commemorate Hezbollah Martyrs’ Day, which annually falls on November 11.

“It is assumed that Saudi Arabia presents itself as a friend of the Lebanese people, but its problem is with Hezbollah. Is this how a friend deals with his friend?” Nasrallah stated.

Tensions rose between Riyadh and Beirut following critical comments made by Lebanese Information Minister George Kordahi in an interview regarding the Saudi-led war against Yemen. During the interview, Kordahi called the Saudi-led Yemen war futile, and noted that Yemeni army forces and their allied fighters from Popular Committees are defending themselves.

Kordahi’s remarks infuriated Riyadh and prompted it to order Lebanon’s ambassador to leave the kingdom within 48 hours and ban all imports from the Mediterranean country.

“We know the Saudi role in the [33-day] war of July [2006] and the Saudi incitement to continue that war,” the Hezbollah chief said, adding, “Saudi Arabia wants its allies in Lebanon to fight a civil war with Hezbollah in the service of Israel and America.”

The Hezbollah chief underlined that Saudi Arabia “has not given Lebanon any help for years because it wants a civil war” in the country.

He also rejected calls for the resignation of the Lebanese information minister, saying that Kordahi’s comments were “calm and objective.”

The leader of Hezbollah resistance movement also added that Saudi Arabia has fabricated a crisis with Lebanon over comments made by the Lebanese information minister over the Saudi war on Yemen.

Nasrallah underscored Riyadh’s exaggerated reaction to Kordahi’s comments was an excuse to open a front against the resistance movement.

Elsewhere in his remarks, Nasrallah pointed to the Saudi aggression on Yemen’s central province of Ma’rib, saying, “We have accepted the Saudi sanctions against us for years because of our position on the war on Yemen.”

The Hezbollah chief added that “Saudi Arabia’s main issue is with Yemen, specifically in Ma’rib, and the results of the war, which has failed completely.”

He noted that the row with Lebanon was Saudi Arabia’s response to gains by Yemeni forces against Saudi-backed forces in Ma’rib, but the pressure would not work and the city’s eventual fall would have “very big” consequences.

Addressing Saudi Arabia, Nasrallah stated, “If you want to stop the war, the only way to do that is to accept the ceasefire and lift the siege” on Yemen.

Saudi Arabia, backed by the US and regional allies, launched the war on Yemen in March 2015, with the goal of bringing the government of former president, Abd Rabbuh Mansur Hadi, back to power and crushing the popular Ansarullah movement, which had overthrown the previous Saudi-backed Yemeni government. The Saudi war has left hundreds of thousands of Yemenis dead, and displaced millions more. It has also destroyed Yemen’s infrastructure and spread famine and infectious diseases.

In the meantime, Yemeni armed forces and the Popular Committees have grown steadily in strength against the Saudi invaders and left Riyadh and its allies bogged down in the country.

In another part of his speech, Nasrallah pointed to recent steps taken by Arab countries to mend fences with Syria, saying, “During recent days and weeks there have been reports about contacts between heads of state from Arab countries with [Syrian President] Bashar al-Assad.”

“The foreign minister of the United Arab Emirates has also paid a visit to Syria… this means acceptance of Syria’s victory [in its war on terror] by Arab countries and their admission of the failure of a project on which they have spent billions of dollars,” the Hezbollah chief added.

During his televised speech on Thursday, Nasrallah denounced as “completely false” the Saudi claims that Lebanon is being controlled by Hezbollah.

“All the Lebanese realize that Saudi claims about Hezbollah’s hegemony over Lebanon are completely false,” the Hezbollah chief said, noting, “These Saudi allegations are absurd and the most ridiculous of them is the idea of the Iranian occupation of Lebanon.”

Nasrallah added, “We do not deny that we are an influential party and that we are the largest party at the political and structural levels, but we do not dominate. There are forces with much less strength than us, who have a great influence on the state, especially in the judiciary.”

He stated, “The argument of Saudi Arabia that we are a dominant party in Lebanon is a complete lie and complete slander.”

Nasrallah stressed Israel’s “anxiety” over the growing strength of Hezbollah and said, “The repeated Israeli maneuvers in the north of the occupied Palestine reflect the Israeli concern about Lebanon.”

“The Israeli maneuvers reflect the fear that Lebanon will storm the settlements in the Galilee,” he added, referring to an Israeli-occupied region near the Lebanese border and the Israeli-occupied side of Golan.

“The Israelis are aware of the resistance’s strength, sincerity, lofty status, and the importance of its strategic ideas,” he said, adding, “if the resistance enters northern Palestine and the Galilee, this will have very big repercussions on the occupation entity.”

The Hezbollah chief also noted, “The Israelis are obsessed with fear of the growing strength of the axis of resistance, especially after the battle of Saif al-Quds (Operation al-Quds Sword).”

Nasrallah stressed that “Israel is experiencing existential anxiety and is trying to breathe through the path of normalization [of relations with a number of Arab countries].”

He added that “all countries with which Israel has normalized relations will not be able to protect it and they know that.”

The Hezbollah leader said, “The increasing Israeli violence against the prisoners and the Palestinians is not a sign of strength, but rather a sign of anxiety and panic.”

Morocco’s monarchy and Israel agreed on December 10 last year to normalize relations in a deal brokered by the United States.