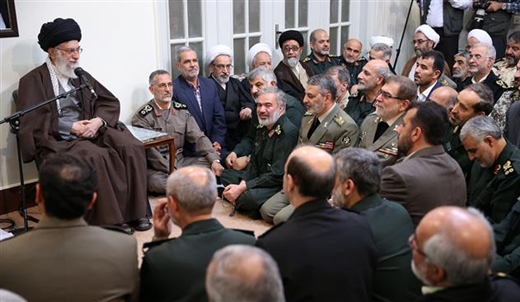 Leader of the Islamic Revolution Ayatollah Seyyed Ali Khamenei says the Iranian Armed Forces are required to enhance their “military might” along with “spiritual and religious motivations."

“In the Islamic Republic establishment, the main task [assigned] to the Armed Forces is to defend national security boundaries; therefore, the operational capability and spiritual motivations of these forces must be upgraded from day to day,” Ayatollah Khamenei told a group of senior military commanders in Tehran on Sunday.

“The Armed Forces are not at the disposal of a specific person or specific party and faction, but belong to the whole nation and country and must be a safe bulwark for people and protector of national and public security,” the Leader added.

The Leader added that the Armed Forces of the Islamic Republic of Iran is the only military power that is “efficient” and “ideologically-driven” and operates in a country with “political independence.”

Ayatollah Khamenei also said Saudi Arabia’s army has failed to realize its objectives more than a year after it invaded Yemen in full force.

The Leader said some armies in the world have been established only for protecting ruling regimes.

“Such armies apparently enjoy high operational and military might, but in the battlefield they indulge only in militarism, irrationality and ruthlessness,” Ayatollah Khamenei said.