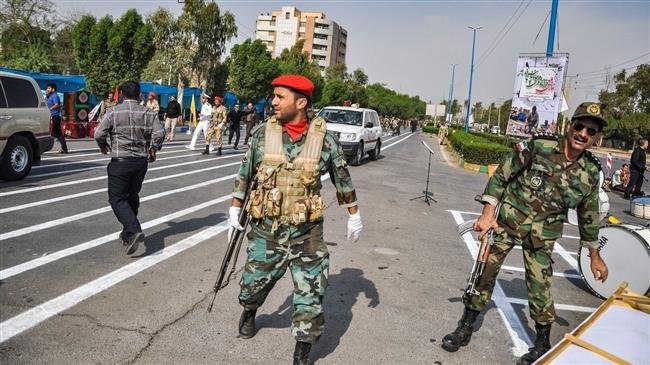 Iran’s Islamic Revolution Guards Corps (IRGC) says a high-ranking commander of the Daesh Takfiri terrorist group, who apparently masterminded the recent deadly terror attack in the southwestern Iranian city of Ahvaz, has been killed in Iraq’s eastern province of Diyala.

The IRGC public relations department announced in a statement released on Tuesday evening that the high-profile militant, better known by the nom de guerre Abu Dhoha, was killed along with four assistants in an ambush carried out by the Iraqi pro-government Popular Mobilization Units – commonly known by the Arabic word Hashd al-Sha’abi.

On October 1, the IRGC rained surface-to surface ballistic missiles on the positions of Daesh in eastern Syria, which along with the al-Ahwazia separatist group took responsibility for the September 22 terrorist attack in Ahvaz.

The IRGC announced in a statement that the missiles were launched at 2 am local time (2230 GMT September 31) from the western Iranian city of Kermanshah.

The statement added that drones bombarded Daesh positions after the missile strikes.

On September 22, four gunmen attacked a military parade in Ahvaz, killing at least 25 people and wounding 69 others. A four-year-old boy was among the fallen victims.

Leader of the Islamic Revolution Ayatollah Seyyed Ali Khamenei said the following day that the attack had been carried out by the same cowards funded by regimes in Saudi Arabia and the United Arab Emirates.

A number of countries denounced or offered condolences over the terrorist attack in Ahvaz.

The statement also sympathized with victims of the attack, saying France is following up developments through its diplomatic mission in Tehran.

The Indonesian Foreign Ministry offered condolences over the deadly attack in a message of condolences.

“Indonesia expresses its deepest condolences and sympathy to the victims and their families.

“Indonesia condemns the terror attack in Ahvaz that resulted in deaths and injuries including children… the Indonesian Embassy in Tehran continues to closely follow the development,” the message read.

The Palestinian Islamic Jihad resistance movement also denounced the attack in a statement.

Belarusian President Aleksandr Lukashenko in a message to his Iranian counterpart Hassan Rouhani condemned the terrorist act, and expressed condolences to the families of the victims.

“Belarus is ready to stand by Iran to counter extremism and terrorism,” he said as he wished swift recovery for the injured and peace and calm for Iran.