Man kills own flesh and blood in affluent Tehran neighborhood 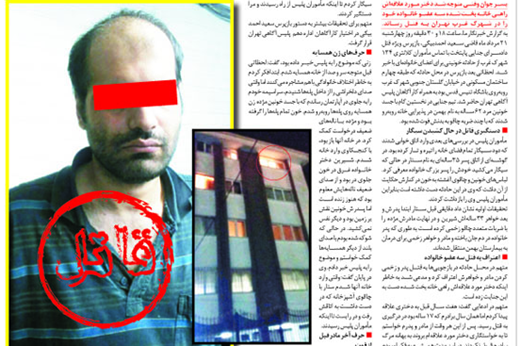 The person behind the gruesome murder is said to have often had frequent arguments with his parents.

When a deadly incident in an apartment in Shahrak-e Gharb was called in Wednesday (August 12), police and crime scene investigators rushed to the affluent Tehran neighborhood to launch an investigation.

The following is the translation of an excerpt of a report Sharq daily published on August 15 of the incident which left three people killed:

On arrival, police found the lifeless body of a 62-year-old father who had been stabbed to death.

Residents of the building told police that that his seriously-wounded wife and daughter had been rushed to the hospital.

A neighbor who had called in law enforcement told the investigators, “When I heard screaming, I came out of my apartment and found the woman and her daughter lay by the elevator bleeding, so I immediately called police and the emergency medical service.”

After hearing what neighbors had to say police arrested the couple’s 35-year-old son.

As the investigation continued, the daughter of the couple died of her wounds in hospital. Her 55-year-old mother, who was in critical condition, managed to tell investigators through body language that her son had been behind the stabbing spree. Unfortunately she could not make it either and lost her life a few hours later.

The police investigation revealed that about seven years earlier a son of the family had been stabbed to death during a street brawl. But earlier in 2015, his parents had forgiven the killer and renounced their right to execution because the murderer was a teenager at the time of the crime. Later, through donations, the blood money had been paid and the convict had been released from prison.

The news that the family forgave the [death-row] convict made neighbors very happy and everyone appreciated the family’s well-intentioned decision.

Yet, the murder had a profound impact on the family. According to neighbors, in the wake of the deadly street fight, the other son of the family [the one who was now in custody for three counts of murder] was nervous and often had arguments with his parents.

It also became clear, during the investigation, that the suspect had been suffering from mental disorder and was on medication.

During the interrogation, the suspect claimed that the murderer of his brother had been executed; a comment which prompted police to assume that he either suffered from dementia or that his family might have kept their decision to forgive the murderer from him.

He admitted, “Around seven years ago, I was seeing a girl. I wanted to marry her. Everything went wrong when my brother was murdered. Our marriage was called off while I was still in love with the girl.”

He further said, “A while ago, I decided to find the girl and pop the question again. I finally found her phone number. Earlier on that [deadly] day, I called her and she told me that she had gotten married and that I had to stop calling her.

Her words hit me so hard and filled me with so much rage. I took a knife and broke the TV screen. Then, I stabbed my father who was sitting on the couch. My mother and sister panicked and ran for their lives. But I stabbed them too. Then I went to my room and lit a cigarette before police came and picked me up.”

Further investigation into the case continues.