A look at Iranian newspaper front pages on Jan. 15

Talks in Geneva between the Iranian and US top diplomats which also saw them take a walk on the streets of the Swiss city dominated the front pages of the Iranian dailies on Thursday. Muslim condemnation of the French satirical weekly Charlie Hebdo’s reprint of images insulting the Prophet Muhammad made front-page headlines too. And reformist dailies also covered on their front pages the comments of Ayatollah Rafsanjani about the upcoming Assembly of Experts elections.

Afkar: Eighteen members of a terrorist group have been arrested in the border province of Sistan and Baluchestan.

Afkar: Air pollution in Tehran is at an alarming level. 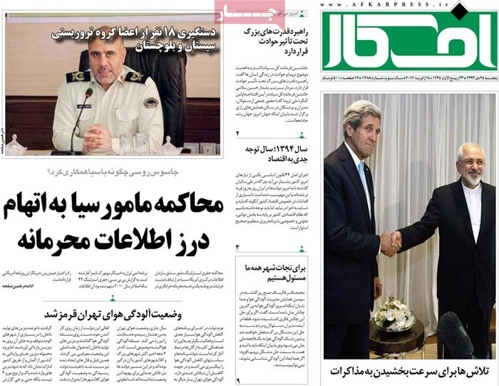 Aftab-e Yazd: Ayatollah Rafsanjani has criticized those who are stoking division ahead of Assembly of Experts elections. 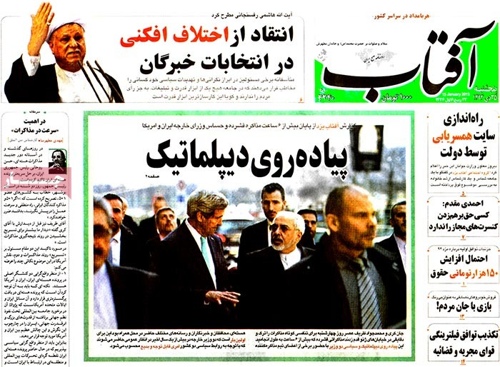 Arman-e Emrooz: Foreign Minister Mohammad Javad Zarif has held a 100-minute meeting with US Secretary of State John Kerry in Geneva. A nuclear deal is within reach.

Arman-e Emrooz: The Ministry of Sports and Youth Affairs is to launch an official matchmaking website. Asr-e Rasaneh: Iranian airliners cannot buy or rent jets which have rolled off the production line more than 15 years ago.

Asr-e Rasaneh: Following a drop in petrochemical prices, Iran has denied allegations that it is selling its petrochemicals cheap. Ebtekar: [Principlist MP] Ali Motahari has said that he will take part in a rally against himself [scheduled for Friday]! 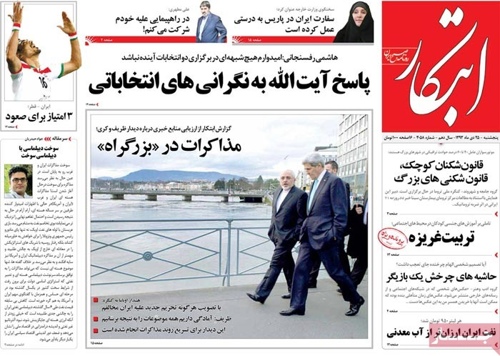 Eghtesad-e Pooya: “A special police unit is to be launched to clamp down on corruption,” said Police Chief Brigadier General Esmail Ahmadi Moghaddam.

Eghtesad-e Pooya: “Some $5 billion will be invested in the steel industry,” said the managing director of the Iranian Mines and Mining Industries Development and Renovation Organization (IMIDRO). 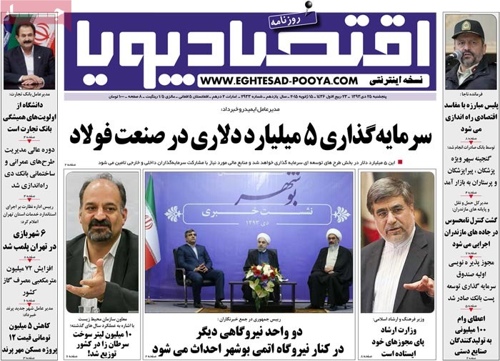 Etemad: In an unprecedented move the top diplomats of Iran and the United States walked the streets of Geneva as they talked about Iran’s nuclear program. 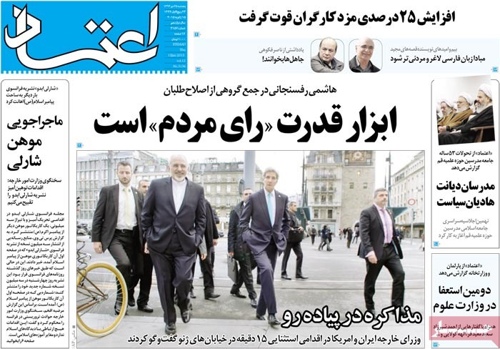 Ettela’at: “To prop up our national interests, we need to let go of our partisan interests,” said the president.

Ettela’at: The Muslim world has condemned the desecration of the Prophet Muhammad by French weekly Charlie Hebdo.

Ettela’at: Members of a terrorist cell have confessed that they have been financed by two Arab countries. 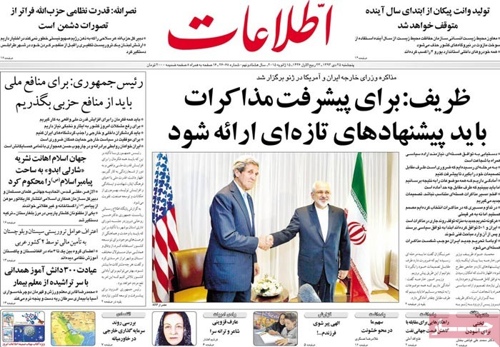 Farhikhtegan: Hardliners are putting pressure on the Ministry of Science, Research and Technology in a bid to interfere with its investigation into illegal scholarships [granted under President Ahmadinejad]. 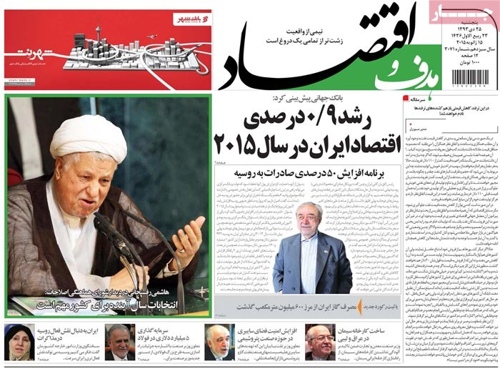 Hemayat: With oil prices continuing to drop, the share of the National Development Fund from oil revenues has decreased. 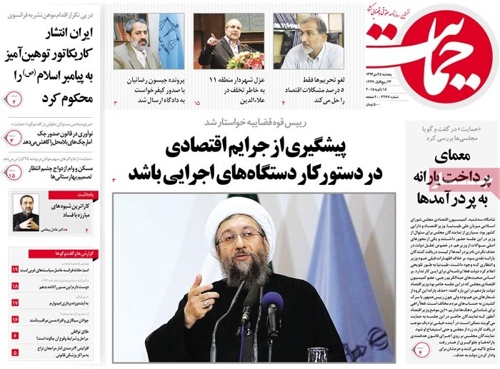 Iran: Forty Somali pirates who were arrested by the Iranian Navy have served out their sentence at Tehran’s Evin Prison. Jamejam: Students of a class in a school in Hamadan [western Iran] have shaved their heads as a sign of sympathy with their teacher who is suffering from cancer. 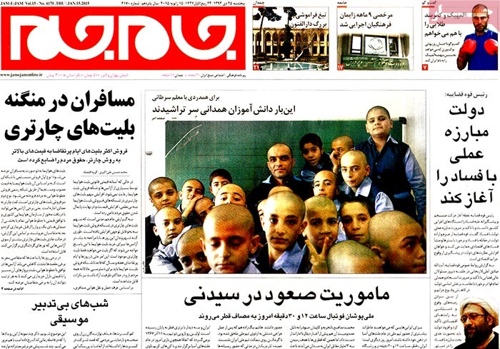 Javan: “New [US] sanctions would spell an end to the nuclear talks,” said the Iranian Foreign Ministry spokeswoman. 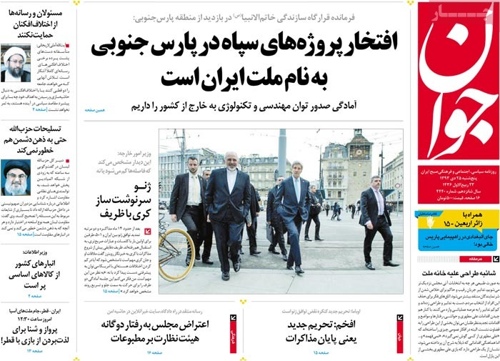 Jomhouri Islami: Iran is to build cement plants in Iraq and Libya.

Jomhouri Islami: With President Rouhani in attendance, a project to develop the southern port of Bushehr has got under way. Kaenat: As much as eight tons of particulates is produced in Tehran on a daily basis. 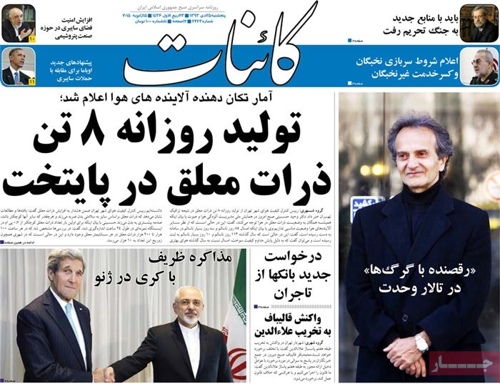 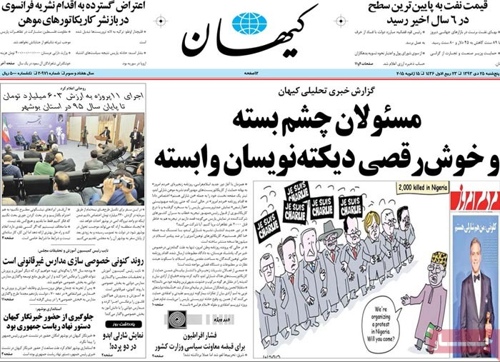 Resalat: The judiciary chief has urged the government of President Rouhani to put a clampdown on corruption on its agenda. Shahrvand: Bushehr is to turn into an international maritime relief and rescue center. 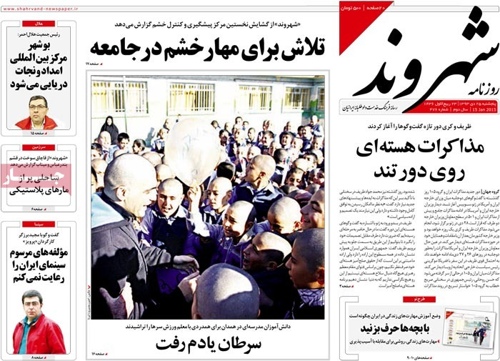 Sharq: The Supreme Court has upheld some of the convictions of former First Vice-President Mohammad Reza Rahimi. Siasat-e Rooz: British Prime Minister has thrown his weight behind the move [by French weekly Charlie Hebdo] to insult the Muslim Prophet.