A look at Iranian newspaper front pages on Jan. 1

Expression of readiness by the judiciary chief to put on trial those who sparked unrest in the country by disputing the results of the 2009 presidential elections appeared on the front pages of several dailies on Thursday. Also on the front pages of newspapers were the military exercise of the Iranian naval forces in the Sea of Oman and the message of the Supreme Leader to a national gathering on prayers.

Abrar: With the president in attendance, the naval forces of the Iranian Army staged a naval parade in the Sea of Oman. 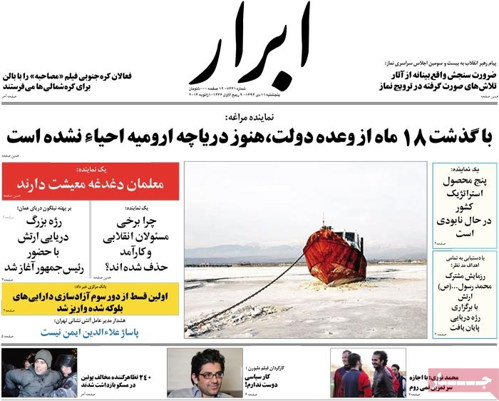 Abrar-e Eghtesadi: A first $490 million installment of Iranian assets has been released.

Abrar-e Eghtesadi: Iran has a new plan to produce oil in the Caspian Sea. 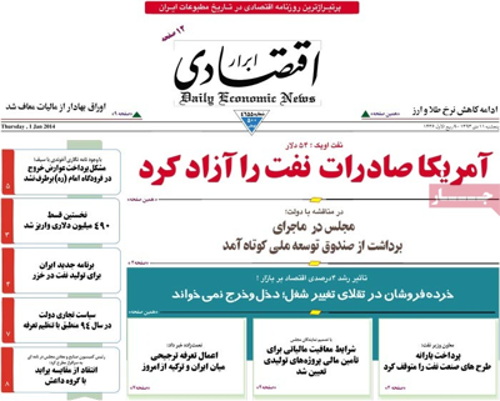 Aftab-e Yazd: With the US giving the green-light to crude exports, a second phase of the oil plot has got underway.

Aftab-e Yazd: “We do need missile capability, but not everything in the country is military in nature,” said Government Spokesman Mohammad Bagher Nobakht.

Aftab-e Yazd: One of the robbers involved in a deadly rampage in Golpayegan has been arrested.

Aftab-e Yazd: The reopening of the British embassy in Tehran is underway. 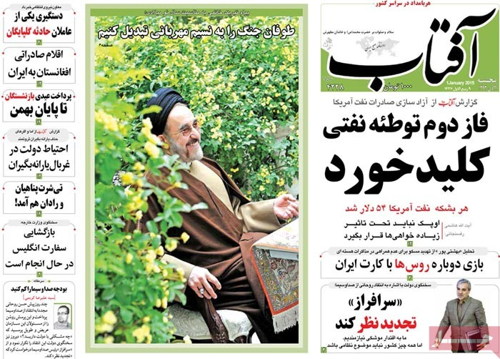 Arman-e Emrooz: “OPEC should not be influenced by excessive demands. We should not allow others to make decisions about our resources,” said Chairman of the Expediency Council Akbar Hashemi Rafsanjani. 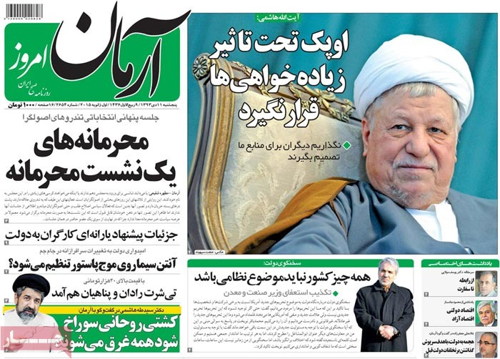 Ebtekar: National currency is likely to be used in trade transactions between Iran and Turkey. 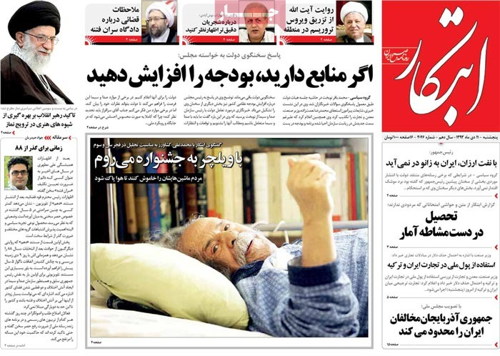 Etemad: “We have received no letter from the Inspectorate General, but an order to halt a tourism development project on [the Caspian island of] Ashuradeh has been issued,” said the director of the Environment Protection Organization. 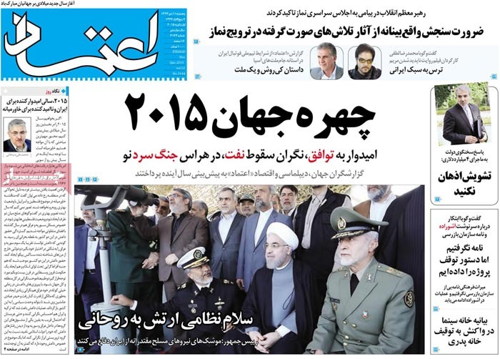 Ettela’at: The country’s development budget is to increase 40 percent next year.

Ettela’at: Investors who put their money in production projects will enjoy tax exemption. 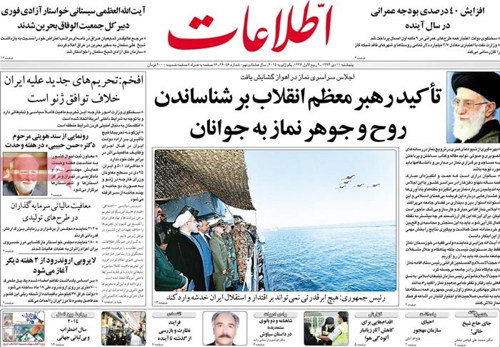 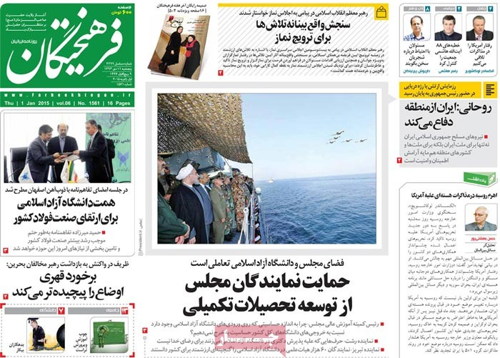 Hemayat: “Some 70 percent of the human rights cases have to do with the sedition of 2009,” said the secretary of the Judiciary’s Human Rights Commission.

Hemayat: The inspector general has sent letters to the heads of the three branches of government, saying the Central Bank has returned the $4.1 billion withdrawn from the National Development Fund. 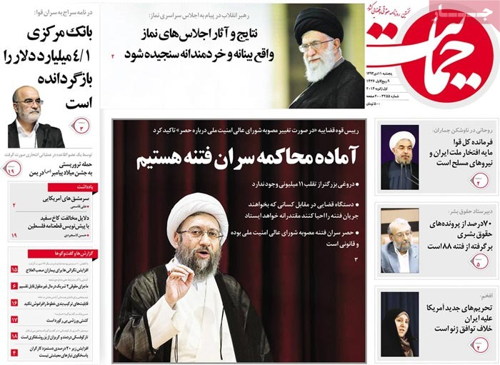 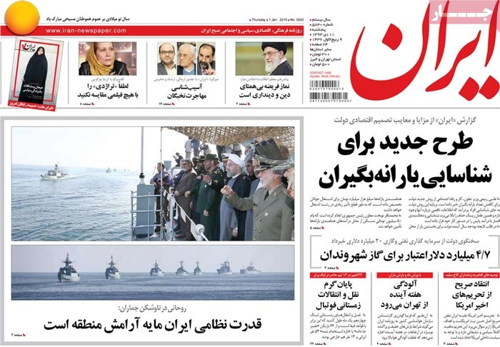 Javan: The judiciary chief has said the judiciary is ready to prosecute the sedition leaders [presidential candidates who disputed the results of the vote in 2009 and sparked rioting.] 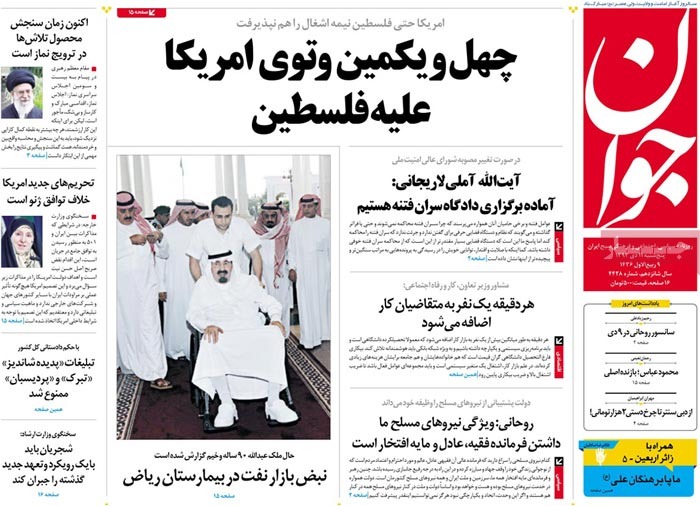 Jomhouri Islami: [Senior Iraqi Shiite cleric] Ayatollah Sistani has objected to the detention of Sheikh Ali Salam in Bahrain and called for his release. 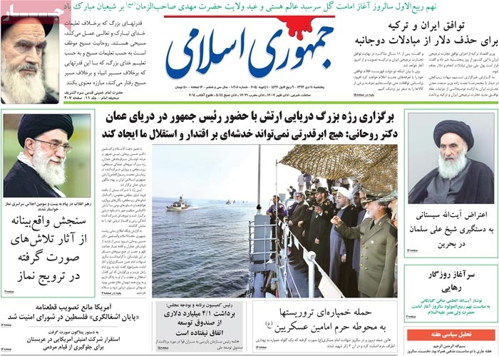 Mardomsalari: The US has vetoed a Palestinian UN Security Council proposal calling for an end to Israeli occupation. 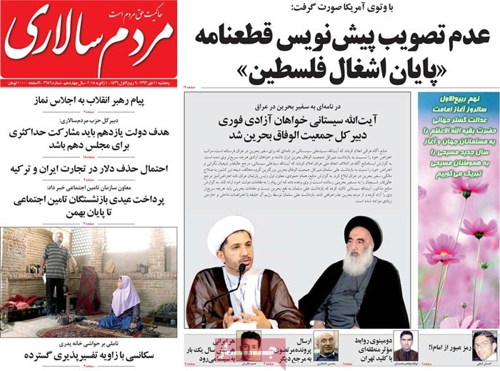 SMT: In a message to a national gathering on prayers, the Supreme Leader has described prayers as the unshakable pillar of religiosity. 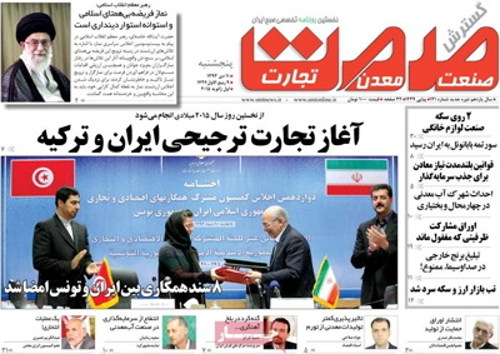 Taadol: The government is investing $15 billion in the oil industry. 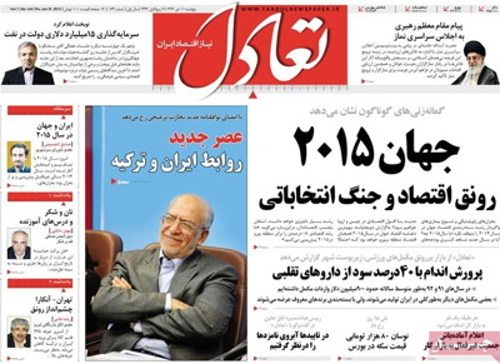