A look at Iranian newspaper front pages on Dec. 4

The inauguration of a railway project that links Kazakhstan and Turkmenistan in Central Asia via Iran to the Persian Gulf dominated the front pages of Iranian newspapers on Thursday. President Rouhani’s comments at the inaugural that neighbors are Iran’s top foreign policy priority also drew front-page attention. And news about a terrorist explosion outside the residence of Iran’s ambassador in Sana’a, Yemen appeared on the front pages of the dailies too.

Abrar: The Islamic Consultative Assembly has required the Defense Ministry to move military facilities out of big city limits. 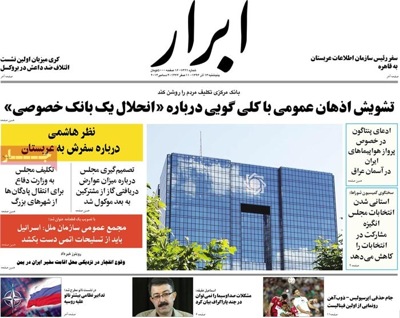 Afarinesh: Foreign Ministry Spokeswoman Marzieh Afkham has dismissed rumors that Iran has struck a political deal with the West. 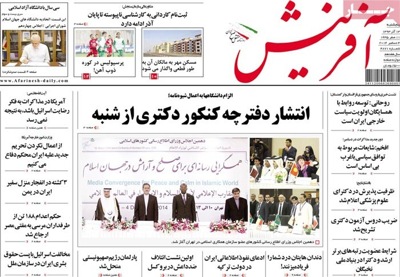 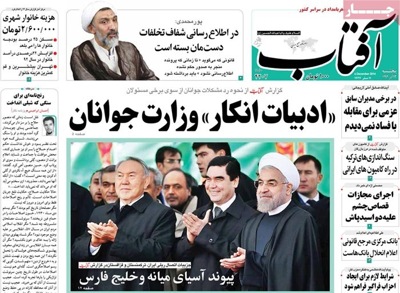 Arman-e Emrooz: A bomb has gone off outside the residence of Iran’s ambassador to Yemen. The Iranian diplomats and embassy personnel have escaped the blast unhurt.

Arman-e Emrooz: “If the US seeks to secure Israeli satisfaction in the [nuclear] talks, it won’t achieve any result,” said Chairman of the Expediency Council Ayatollah Akbar Hashemi Rafsanjani. 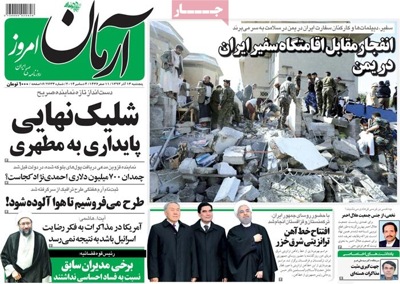 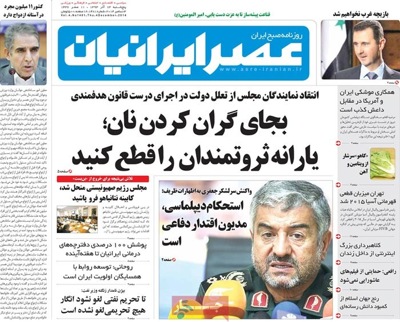 Asr-e Rasaneh: “Iran is the 19th largest economy in the world,” said the director of the State Tax Organization. 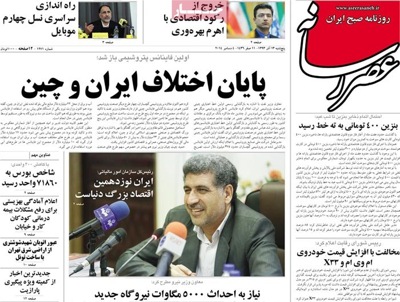 Asrar: Hossein Rezazadeh, a former world weightlifting champion, should quit his seat on Tehran City Council if he wants to contest the top post at the Weightlifting Federation. 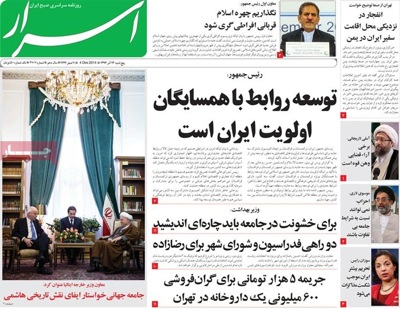 Ebtekar: The British Embassy in Tehran will gradually resume its functions. 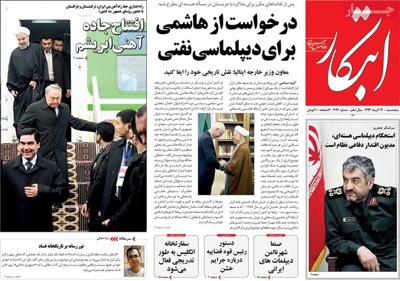 Eghtesad-e Pooya: “All Iranians are now under basic medical insurance coverage,” said the minister of cooperatives, labor and social welfare. 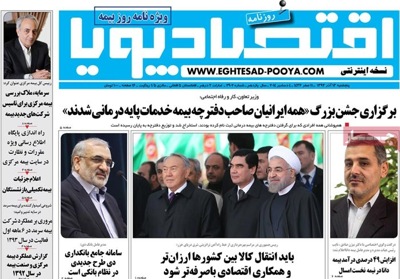 Etemad: The tax exemption of three major institutions has been rescinded.

Etemad: The opponents of [President Rouhani’s] government have launched a seemingly vain attempt to cancel the credentials of Ali Motahari [a Tehran MP who has broken ranks with fellow principlist deputies to side with the government on many issues]. 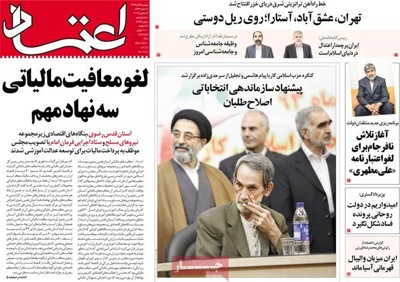 Ettela’at: With the inauguration of Iran-Turkmenistan-Kazakhstan railway, Central Asia has been linked to the Persian Gulf on tracks. 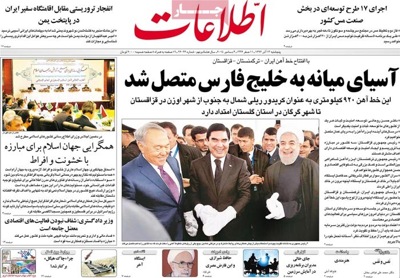 Haft-e Sobh: Five of the septuplets a young woman gave birth to in Mashhad earlier this week have died. 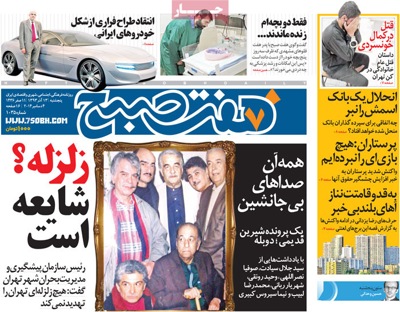 Hamshahri: The Norwegian ambassador to Tehran has said that her country will try to solve the problems Iranian students face in the Scandinavian country. 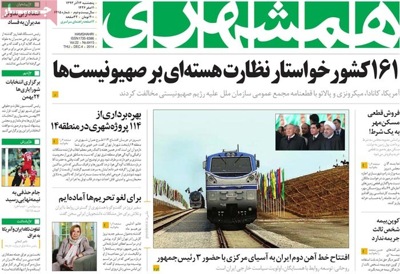 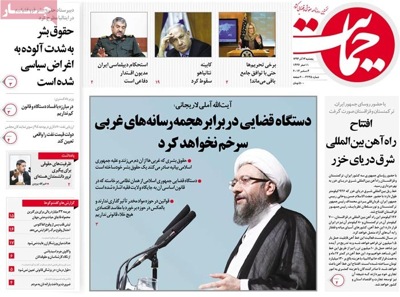 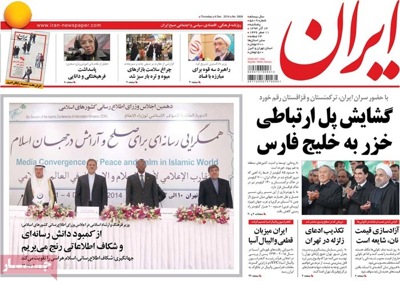 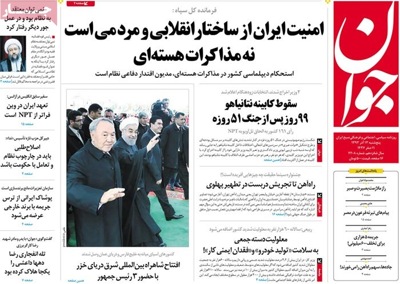 Jomhouri Islami: “A new round of talks will be held with P5+1 by the end of the month [December 21],” said the Iranian Foreign Ministry spokeswoman.

Jomhouri Islami: Ayatollah Lotfollah Safi Golpaygani, a prominent source of emulation, has protested the Chinese government for its tough line in dealing with Muslims. 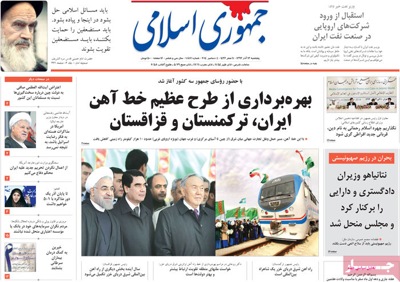 Kayhan: That the White House has said even if a comprehensive deal is struck, sanctions will remain in place amounts to admission that the nuclear case is a mere excuse [to pressure Iran].

Kayhan: The reasons behind a recent hike in bread prices will be examined at parliament’s Economic Committee. 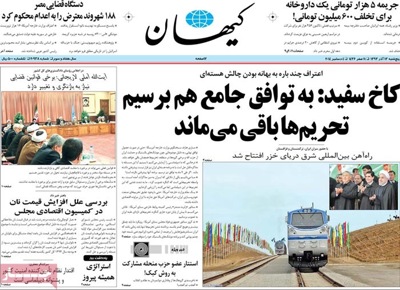 Khorasan has described the launch of Iran-Turkmenistan-Kazakhstan railway project as “Iran’s giant stride toward becoming a regional transit hub”. 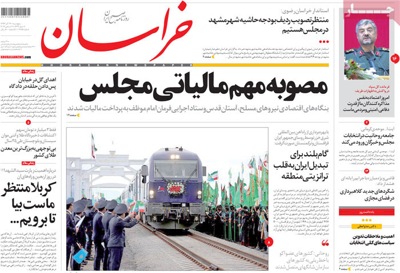 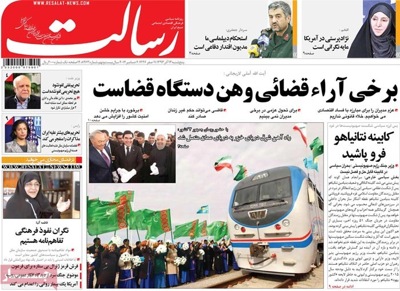 Roozan: “Unfortunately parties have failed to act as well as they are expected to,” said Chairman of the Expediency Council Ayatollah Akbar Hashemi Rafsanjani. 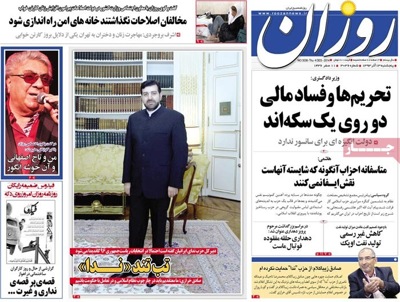 Shahrvand: The Crisis Management Organization of the capital has denied reports on social networks that an earthquake warning has been issued in Tehran. 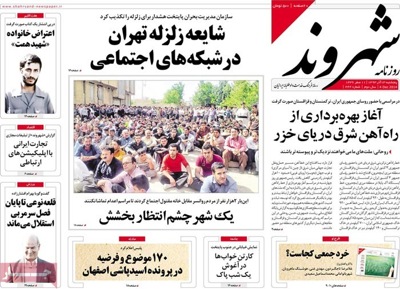