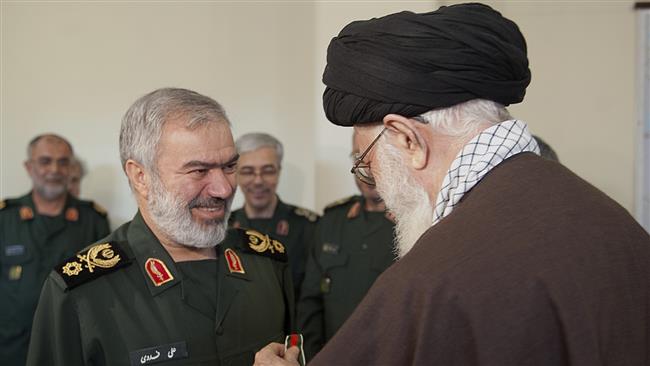 In a Sunday meeting, Ayatollah Khamenei conferred the medal on Rear Admiral Ali Fadavi, commander of the IRGC Navy, and four other high-ranking commander for arresting the trespassing US sailors.

Ayatollah Khamenei on January 24 commended as timely and praiseworthy the “brave” move by the IRGC naval forces, who arrested 10 US sailors after their patrol boats entered the country’s territorial waters on January 12.

The Leader stated that the praiseworthy measure by the IRGC forces stemmed from their faith and courage and was taken in the right time, adding that the capture of the US sailors “was in fact an act of God, who brought the Americans into our waters so they would be arrested with their hands on their heads through your timely measure.”

On January 13, the IRGC announced that ten US Marines, who had drifted into the country’s territorial waters in the Persian Gulf and had been taken into Iranian custody, were released after Americans apologized for the incident.

He added that the trespassing occurred because of technical problems with the navigation systems of the American vessels.