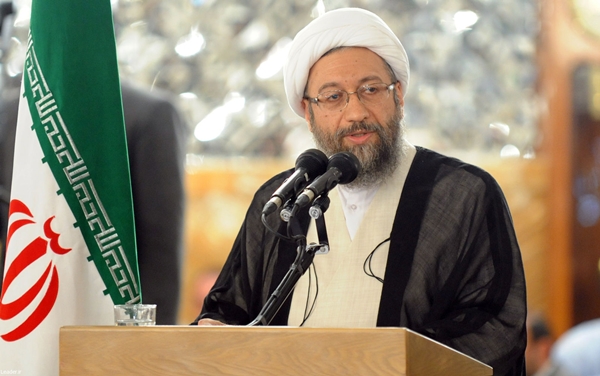 Given the sensitive role of media play, they should be lent all-out support to be able to be instrumental in prevention of vice, said Ayatollah Sadegh Amoli Larijani.

Speaking at a meeting of senior judicial officials on Monday, the top judge said the Judiciary has always appealed to the press and mass media to help it administer justice. “Given the sensitive role media play in these areas, they should be lent all-out support to be able to be instrumental in prevention of corruption.”

The top judge expressed displeasure with president Rouhani’s implicit criticism of the Judiciary in a keynote speech at the inaugural of the Press and News Agencies Exhibition Sunday, but said, “Up to now, I have avoided divisive comments which do not serve the country’s interests or those of solidarity and fraternity. I will continue to do so in the future.”

Ayatollah Larijani also reaffirmed his support for the nuclear negotiators and the Joint Comprehensive Plan of Action, saying, “Some critics of the deal have been unfair, making hardline comments which are anything but true. I believe some of them are even actionable. I don’t think the number of such people is very large.

“On the other hands, there are some prudent, pious individuals who critique the deal point by point. All through the talks, I have always supported the negotiating team and the esteemed government. That remains the case to this day. The negotiating team brings together religious individuals who strove around the clock to push things forward. That is no easy task. So the end result of their endeavors deserves praise and gratefulness.”

The judiciary chief further said taking pride in the deal depends on its practical results and how it is implemented. “To me it is not clear whether the Joint Comprehensive Plan of Action is actually a source of honor.”

The following is the translation of additional comments the top judge made as reported by Mizanonline.ir, affiliated to the Judiciary, on November 9. The news agency originally titled its report: “Frank comments by the Judiciary chief in response to president’s remarks”.

The press should comply with principles of ethical criticism and laws

Ayatollah Amoli Larijani said that the press should play their role and fulfill their mission in line with ethics of criticism along with ethical and legal principles, adding, “You should not insult, slander or commit acts against national security under the pretext of being critical.”

The judiciary chief went on to say, “Unfortunately, some media outlets fan the flames of public concerns. The Judiciary is duty-bound to prevent offenses while supporting the press. It is not acceptable for media to be on foreigner payroll and act against national security instead of playing a role in raising awareness and promoting ethics.”

He said, “A few years ago, a motion about parliamentary deputies’ immunity from prosecution was floated. Under the motion, if a deputy made an untrue statement deemed libelous, he/she couldn’t be prosecuted, but the parliamentary motion was vehemently rejected by the Guardian Council.”

Larijani added, “That applies to the press, too. But it’s for judges to make decisions in this regard and outsiders are not entitled to get involved.”

Tough punishments dished out when individuals knowingly break the laws

Ayatollah Larijani said that the Judiciary fulfills its duties with authority and won’t be swayed or scared by pressures. “A lot of individuals working for media and the press might not be aware of the laws and the red lines and might make a mistake out of negligence. Therefore, I have repeatedly advised esteemed judges not to mete out harsh punishments for those who cross the red lines unknowingly; I have told them to commute the sentences as they see fit.”

On the recent barrage of criticism against the Judiciary in the run-up to the elections, Larijani said that compliance with the law and serving national interests under the Constitution is what the Judiciary pursues. “Pressures and criticisms over human rights should not have an impact on our job. Certainly, they won’t. What we expect from the press and those in authority in the country is to help the judicial branch which is a pillar of the establishment. They should know that the authority of the Judiciary, like other branches, contributes to security in the country.”