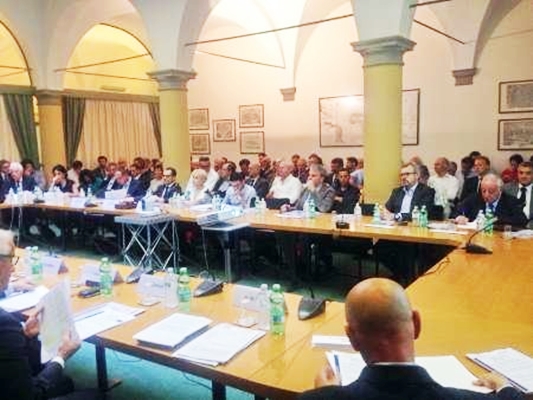 Entrepreneurs, market experts, banking and industry representatives in the Italian northern province of Emilia-Romagna have voiced their willingness to launch joint investments with Iran.

A conference on joint trade and investment ventures between Iran and the Emilia-Romagna Region was held on Friday June 17 in the provincial capital city of Bologna.

The event was attended by more than 200 Italian entrepreneurs and businessmen as well as other economic elite from the region, in addition to Iran’s Ambassador to Rome, Jahanbakhsh Mozaffari.

During the conference, Gino Cocchi, Director of the international affairs of Emilia Romagna Industrial committee, underlined the importance of enhancing ties with Iran in view of the country’s gradual return to free trade and foreign investment following the nuclear deal.

He estimated that Italy’s exports to Iran will reach a total of 3bn euros in the coming four years as well as that investment in Iran will experience substantial increases.

Deputy President of Emilia-Romagna Bank Pierre Peju, while referring to the banking problems faced by Iran, said, “We are optimistic about the future and everybody needs to be patient.”

The Iranian ambassador to Rome, for his part, said “Despite all existing problems, the Joint Comprehensive Plan of Action (JCPOA) is being implemented and all the obstacles on Iran’s establishing ties with the world have been removed following the nuclear deal.”

“The conditions have changed in a way that they are irreversible,” Mozaffari underlined.

The Iranian official went on to emphasize that “the unprecedented interest of Italian investors for being present in Iran indicates that enemies have failed to prevent the execution of the JCPOA.”

In addition to expressing eagerness to make trade and investment in Iran, Italian companies and industries called for attraction of investment from Iran for the realization of joint initiatives.