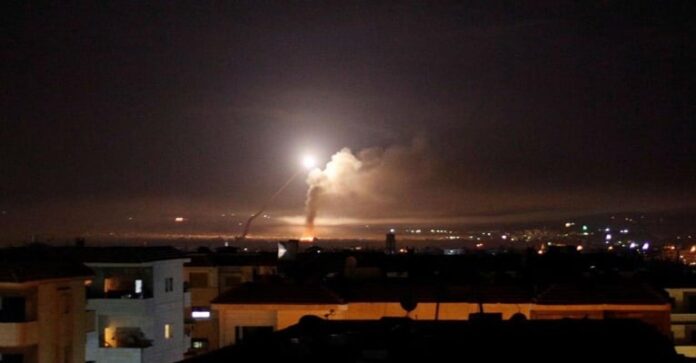 Ten Zionist regime’s military positions in the Israeli-occupied Golan Heights were targeted by rocket fire amid heightened tension, according to the Beirut-based TV channel Al-Mayadeen.

The targeted Israeli military sites include a military reconnaissance centre, a position for border security, a military centre for electronic jamming, a military centre for spying on wireless and wired networks, a communication station, an observatory for precision weapons, a gunships heliport, the headquarters of the regional military command of brigade-810, the command centre of the military battalion in Hermon, and the winter headquarters of the special snow unit, according to the Al-Mayadeen report quoted by the Xinhua news agency.

No party claimed responsibility for the attack, but Israel accused Iran of firing the rockets, saying forces linked to Iran’s Islamic Revolution Guards Corps were behind the attacks.

If confirmed, this would be the first rocket attack carried out directly by Iran against Israel.

The attack targeted areas in the Quneitra and Homs region near Damascus.

The Syrian state news agency SANA reported that several military sites in Syria including a radar facility, air defence positions and an ammunition depot were destroyed.

SANA said some Israeli missiles had been brought down over Damascus, Homs and Sueida.

The Israeli army said it was attacking “Iranian targets” inside Syria.

Iran had vowed retaliation after a suspected Israeli airstrike against the T-4 airbase in central Syria last month killed seven of its military personnel in a Syrian air base.

Israel has been claiming that Iran is setting up bases of operations in Syria in order to stage attacks against Israel.

The attack followed the US announcement of withdrawal from the international nuclear deal with Iran.

Hours after the Trump announcement, Israeli rockets targeted a military base in Kisweh in the south-western countryside of the capital Damascus, Syrian outlets reported.

That attack reportedly killed 15 people, including eight Iranians, the London-based Syrian Observatory for Human Rights said, though Syrian forces said there were no casualties.

The Zionist regime seized the Golan Heights from Syria during the 1967 Six-Day War and has continued to occupy two-thirds of the territory ever since, in a move that has never been recognized by the international community.

The regime has built tens of illegal settlements in the area since its occupation.