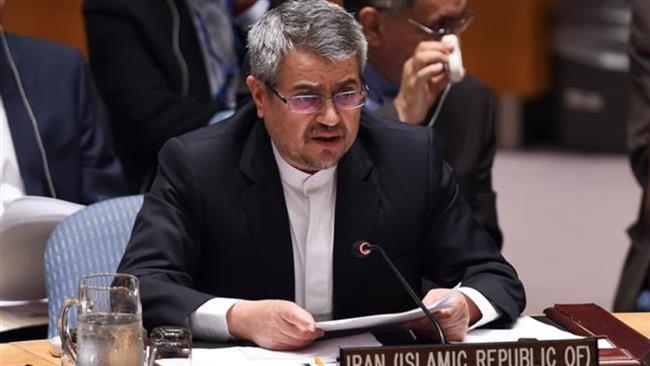 Iran's UN ambassador has said that Israel continues to block all international and regional efforts to create a nuclear weapons-free zone in the Middle East.

The Israeli regime is the sole barrier to establishing a nuclear weapons-free zone in the Middle East region, Iran’s Ambassador to the UN Gholam Ali Khoshrou says.

Addressing a Friday meeting of the UN General Assembly’s disarmament committee, Khoshrou said Tel Aviv is “the only impediment… toward realizing a nuclear weapons-free zone in the Middle East.”

“Israel continues to block all international and regional efforts to fulfill this goal,” he added.

During the Friday meeting, Israeli Ambassador to the UN Alon Roth-Snir reiterated the regime’s strong opposition to a nuclear agreement clinched between Iran and P5+1, saying it is “unlikely to stop Iran’s relentless pursuit of a nuclear weapons’ capability.”

Iran and five permanent members of the UN Security Council – the United States, Britain, France, China and Russia – plus Germany finalized the text of the agreement dubbed the Joint Comprehensive Plan of Action (JCPOA) in the Austrian capital Vienna on July 14.

Israel has repeatedly accused Iran of pursuing non-civilian objectives in its nuclear energy program. Iran rejects the allegations, arguing that as a committed signatory to the nuclear Non-Proliferation Treaty (NPT) and a member of the International Atomic Energy Agency (IAEA), it has the right to use nuclear technology for peaceful purposes.

In addition, the IAEA has conducted numerous inspections of Iran’s nuclear facilities but has never found any evidence showing that the country’s civilian nuclear program has been diverted to nuclear weapons production.

Unlike Iran, Israel, which is widely believed to possess between 200 to 400 nuclear warheads, is a non-signatory to the NPT and continues to defy international calls to join the treaty.