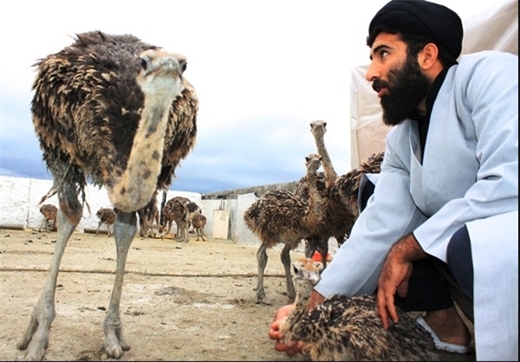 Hujjat al-Islam Seyyed Hadi Alavi, a young novice from Bandar-e Gaz, has started an interesting experiment, constructing a small ostrich farm on the roof of his house

According to Fars News Agency, Seyyed Hadi Alavi, a young scholar from Bandar-e Gaz who is active in both clerical and commercial interests, believes that one can use any space for job creation.

Although the business hasn’t been running for long, he has created a small hatchery on his rooftop, purchasing an incubator and a few ostrich eggs, and he already has 20 ostrich chicks.

Seyyed Hadi Alavi talked about his reasons for entering this field, saying, “With the idea of a Resistive Economy in mind, I chose ostrich cultivation after lengthy research, mainly because it has a higher efficiency and it’s more environmentally adaptable than cow, sheep or other bird and animal farming. 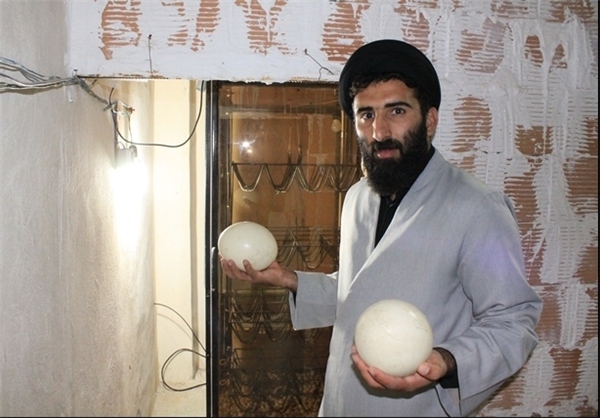 The young scholar added, “I started this project without any governmental support and with less than $10,000, which was spent on buying the incubator, ostrich eggs, a plot of land and other tools. Hopefully it will become operational by Nowrouz (the Persian New Year in March).”

Alavi mentioned, “The price for a one-day old ostrich is about $50, a one month old is between $70 and $85, and the nutritional expenses to raise an ostrich to adulthood (which takes one year) is about $110. At this stage, the price of an ostrich, depending on its weight, starts from about $440. If you sell all its derivatives such as its meat, oil, skin, eyes, and so on, then you can surely make more profit.”

He explained about ostrich characteristics and said: “Ostriches are environmentally adaptable animals. Their meat is the only meat which contains no cholesterol and also it has less fat, a suitable combination of amino acids and a high percentage of saturated and unsaturated amino acids. It is highly recommended for people who are suffering from heart disease and high blood pressure or those who are on a diet.”

Alavi commented on the lack of support from some authorities for the younger generation’s economic activities, saying, “To develop my business I have bought a piece of land, but then I faced some problems regarding obtaining an ostrich farming license, and with providing electricity for my farm. I have permission for this activity, but the authorities of the Ministry of Agriculture wouldn’t give me a license for ostrich farming, with the excuse that there’s no ostrich farm in Golestan Province. Also, on order to rig up electricity to my land, the electric company has asked for about $2700, which is a big obstacle for my very limited capital.”

He continued, “At the moment three of my family and I are working to get this project to realization, but as the business develops, there will surely be more people involved, both directly and indirectly. The government should provide special support for young people who have a real intention to create more jobs and economic growth, whether by reducing their expenses or providing incentives.”