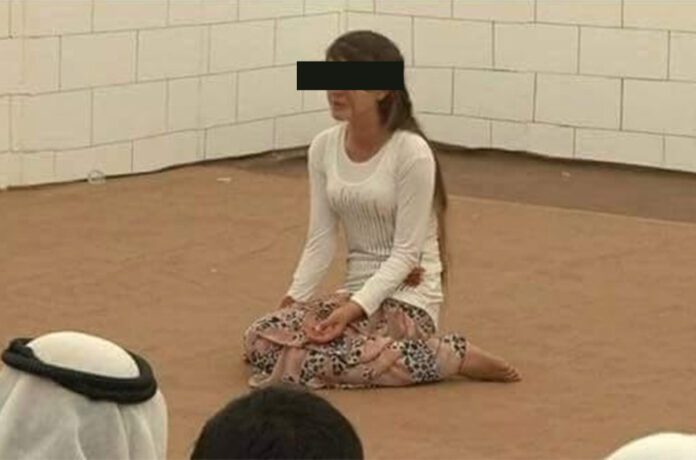 The ISIS terrorist group is trafficking dozens of sex slaves ‘to be sold in horrifying auctions to the UK ally Saudi Arabia’.

Sex slaves captured by ISIS terrorists are being sold at sickening auctions in Saudi Arabia – a key UK ally – Sun Online has been told.

The horrifying discovery was unveiled when an extremist was killed in fighting at the town of Al-Shirqat, which was taken over by the terror group in 2014.

Members of the Iraqi Popular Mobilisation Units, a state-sponsored militia fighting to liberate the town, recovered his mobile phone and claimed to have found a picture of a sex slave market taken in Saudi Arabia.

The Arab nation is part of the so-called international coalition fighting the ISIS alongside the UK and US but wealthy Saudis have been accused of sponsoring the terror group for years, as reported by British media and covered by Jam News.

Britain also sells weapons to Saudi Arabia, despite concerns the hard-line Muslim nation is committing war crimes in Yemen – and it “seems inevitable” they involve UK weapons according to a report leaked earlier this month.

A spokesman for the PMU told Sun Online, “Our investigation officer was appalled at the set of images involving what we believe to be an Iraqi Yazidi (an ethnic minority in the region) woman taken as sex slave.

“Images were of the auction in Saudi Arabia of the woman and sexually explicit materials of the fighter and the woman in a hotel.

“Location data was observed on the image file as enabled by default on many smart phones.

“Further images involved ISIS members in Iraqi areas occupied by ISIS including Mosul and Baiji which indicates this fighter has been with ISIS for a long period of time as Baiji was liberated by us months ago.”

The fighters are now desperately trying to track down the woman’s family and launch a rescue attempt.

“We are engaging with our Yazidi members to find the family of the woman, location and health status,” the spokesman added.

“We hope to liberate her and all Iraqi women taken as sexual slaves by ISIS within Iraq or outside of Iraq as their basic human rights are being denied.

“We cannot allow this, as the force dedicated to the defence of Iraqi citizens.”

Sadly, it is not the first time the accusation that ISIS sells rape victims to Saudi Arabians has emerged.

An 18-year-old Yazidi sex slave who escaped ISIS claims she was sold in an international auction.

The teenager, Jinan, was abducted from her village in Northern Iraq last year when ISIS troops stormed her village and took her prisoner before torturing and sexually abusing her and the other captives in the terror group’s stronghold of Mosul.

She said dozens of women were being held in a large room, and it was not only Iraqis and Syrians trading women but also Saudis and Westerners, whose actual nationality was not clear.

Potential buyers, she wrote in her book ‘Daesh’s Slave’ would inspect the women “like livestock”.