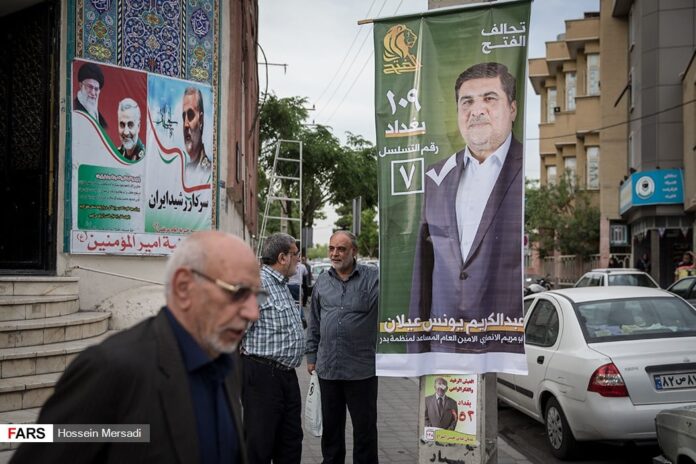 The Iraqi quarter in the Iranian capital, Tehran, is brimming with election fervour in the run-up to the May 12 parliamentary votes in the Arab country.

Not many Tehran residents may know that a “Little Iraq” is located in southeast Tehran. Over the past four decades, the Dowlatabad neighbourhood has been home to Iraqi citizens (mainly Shiites) who fled the tyranny and atrocities of former Iraqi strongman Saddam Hussein’s regime and took refuge in Iran. Political circumstances have kept them from returning to their homeland for a long time, but have not been able to affect their customs as well as cultural and social traditions. Henceforth, you will feel you are walking in a Baghdad street once you enter the Dowlatabad neighbourhood.

Arabic statements on walls, signs outside shops, the style the prayer sites are decorated, clothes and even the Arabic conversations among people, all remind you that you are going away from the Iranian cultural and social aura and entering a new ambience. In addition to these features, maybe the unique communication among citizens is another striking feature of an Arab society, which is pretty obvious in Dowlatabad: Crowded restaurants, chairs and tables on pavements for people to sit next to each other and catch up on what’s going on in their daily lives, mosques and prayer sites packed with worshippers during prayer times, and, of course, hookahs, which are almost everywhere in this neighbourhood!

Many Arab residents in this neighbourhood regard themselves as Iranian-born. Some of them have even left Dowlatabad over the past years and moved to more central neighbourhoods in the capital. Still, it seems Dowlatabad remains the best place for Iraqis in Tehran to live because it is no different from Arab neighbourhoods in Baghdad or Najaf.

But if you go for a walk in Dowlatabad these days, it is not only the usual Arab elements that draw your attention, but you will notice an election campaign going on, a campaign depicting the most important political Shiite currents in Iraq in the lead-up to key parliamentary elections slated to be held on May 12. Photos and banners of candidates, including Nouri al-Maliki, Hanan al-Fatlawi, Haider al-Abadi, Hadi Al-Ameri, etc. The election ambience in Dowlatabad show the residents of the “Little Iraq” in Tehran are seriously following up on their political developments.

Although, so far, many Iraqi opinion polls suggest a relative lead for the al-Nasr (victory) alliance led by Haider al-Abadi, there is a different atmosphere in Dowlatabad where supporters of Nouri al-Maliki, who leads the ruling State of Law coalition, are in the majority. What is noteworthy in Dowlatabad is that most of Abadi supporters are the younger generation of the Iraqi community there, which could be a big success for Iraq’s incumbent prime minister.

The Iraqi election is around the corner, but the limited time left until then is very determining and sensitive for Iraq’s political currents and groups. Like their comrades in Iraq, Iraqi expats in Tehran’s Dowlatabad closely follow election news as they cherish the idea of a better future for their country.

What follows are Fars News Agency’s photos of the election fervour in Dowlatabad: