Iranian lawmakers have added a new article to the proposed budget bill for the next fiscal year (starting March 21, 2017) to attract investment by the country’s nationals living in the United States.

The legislation was approved during the open session of the Parliament on Sunday as 150 lawmakers voted in favor while 19 voted against and six abstained.

Under the article, the legislators urged the government to provide nearly 61.7 million dollars to the Ministry of Science, Research and Technology and the Ministry of Economic Affairs and Finance to recruit and attract investment by Iranian nationals living in the US.

Speaking after the approval of the article, Iranian Parliament Speaker Ali Larijani said the “reciprocal measure” was adopted in response to the new US administration’s move for banning entry into the country of nationals from seven Muslim-majority countries, including Iran.

Meanwhile, lawmaker Mohsen Kouhkan, who had tabled the proposal, also said the Parliament’s move “conveys a clear message” to the world that the Islamic Republic supports every single one of its citizens all over the globe.

US President Donald Trump issued an executive order on January 27 that blocked entry into the United States for 90 days for citizens from Iran, Iraq, Libya, Somalia, Sudan, Syria and Yemen. It also suspended entry of all refugees for 120 days and barred Syrian refugees indefinitely.

US District Judge James Robart in Seattle, Washington, suspended the order nationwide on February 4 after his state challenged its legality. A three-judge panel in the 9th US Circuit Court of Appeals upheld Robart’s ruling.

The White House has vowed to issue a revised travel ban which would still target the same seven Muslim countries.

Iran’s Foreign Ministry on January 28 censured the recent “insulting” decision made by the new US government, vowing that Tehran would respond to the move in kind.

“In order to protect the dignity of all the Iranian people inside and outside the country, the government of the Islamic Republic of Iran will scrutinize the short-term and long-term outcomes of the decision by the US government on Iranian nationals and will take appropriate consular, legal and political measures,” the ministry said in a statement.

It warned that any US move to extend discriminatory measures against the Iranian nationals would be illegal and said the Islamic Republic reserves the right to react to any violation of international law by Washington. 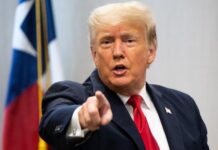